Just use an own Map16-Page!

As for progress of the cleanup for COLLAB, it's basically done, but it's being tested by Oh Hell No at the moment.!!! YOUR SAMPLES ARE COMING SOON !!! 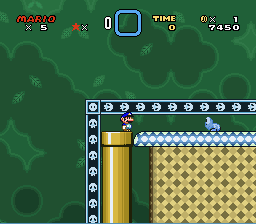 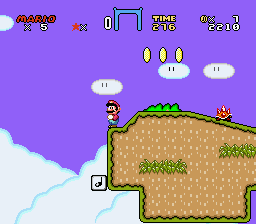 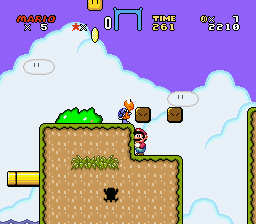 Also I took the palette from the title screen, because I liked it.My hack TEMP is cancelled for now but I started a new
vanilla hack, you can visit my thread here.
Last edited on 2013-10-31 02:32:07 PM by K1ngHacks

Posted on 2013-10-31 07:34:26 PMLink
Great so see it! Well I'm not sure if I'll change the Palette, but I'm glad you liked it at least! ;)
@everybodyelsewhoparticipatedinthiscollaborationprojectwhichhasanextremelycreativenameandIdontmeanthatinanironicway;);) If you've got any progress (let it only be a Screen or two) feel free to show it off as you don't need to care about Spoiler in a completely open Teamhack! Here is a screen shot from my level. Please give feedback

Posted on 2013-10-31 10:11:32 PMLink
It obviously was a good idea to give you a Level Slot later! Even though it still looks a little clattered, which is not the thing some people like, I am of the opinion that it fits right into the Hack (who else likes flying Water btw?

) and the difficulty should be ok, as I considered it playable without any problems! Keep it up!

I´ll ad Layer 3 for a better looking background later btw. If anyone else wants to use, just contact me!


Sorry but I did not read that! You can take as much time as you need. I am quite busy with private stuff right now, so you are the last one who needs to worry!

To the others: Feel free to post any progress you´ve got, but do not expect me to directly react!

Level Picture, if you didn't have enough time to watch the video.

And Neidave, you can use this picture as a part of hack thumbnail:

Level Picture, if you didn't have enough time to watch the video.

And Neidave, you can use this picture as a part of hack thumbnail:

PS: I'm worry about the difficult. It's seem to be a bit hard.

It looks nice! The Hack is rather meant to be a mix of different styles than something extremely professionally made, but yeah - You could slightly simplify the overall difficulty, as some jumps do not seem that easy... Your choice though! ;) (I may just change some things anyway!)C3 stuff: http://www.smwcentral.net/?p=viewthread&t=67626 HDMA-Codes and Custom Music included!

) into something ... flying? Just try and I´ll use it in Level 9 and edit some other levels as well! ;) It think something like that should be ok although it is a Vanilla-styled game...

As always: Feel free to post any updates or give feedback to the already posted material! Keep going guys! I really dislike the style of the hack. It's just ruining the feeling of SMW for me as most hacks in this style do. All the palettes destroy the athmosphere of the original game which should be kept in my opionion. Best of it is still Robju's OW which isn't good either. It looks empty and the HDMA is somewhat clashing with the palettes (probably just me). Judging from the screenshots it's just another type of this hack. Nothing really fascinating for me.
That's all I have to say.
Note: This is just my opinion.
Last edited on 2013-11-28 08:35:45 PM by 24121

Posted on 2013-11-28 08:43:14 PMLink
Thanks for you opinion! Of course taste is different regarding everything that has to do with something "creative" in any way and I can really see why you like Hacks keeping the original games atmosphere. On the other hand I am someone who never excessiveley played the Original and I am just finding it fascinating to make something new and at least a little different to SMW, but still keep the graphics unedited for the most part. Regarding the "innovation" of the Hack, I can just say, that I do not consider it something extremely important and just want to make it a fun project for everybody who takes part!

Posted on 2013-11-28 08:52:45 PMLink
Originally posted by Neidave
I am just finding it fascinating and at least a little different to SMW
Totally understanding that.


Originally posted by Neidave
But still keep the graphics unedited for the most part.
Just a part of SMW's feeling. Killing it with the palettes in my opinion :/


Originally posted by Neidave
To make something new / Regarding the "innovation" of the Hack.
I don't think this style is new anymore. It's becoming something really "mainstream" especially in the German hacking community.


Originally posted by Neidave
I just want to make it a fun project for everybody who takes part!
Didn't say anything against that. I really respect everybody leading a collab even though this one is really short. It's just so much work x___x