I decided to start working on the short "mostly vanilla" hack, which I may upload to SMW Hacks section here if it turns out to be good. Why have I decided to make this hack? Well, I used to do SMWhacking in the past, so now I decided to come back. I wanted to make something simple like this so when I finish it, I´ll move to some harder stuff. I wanted to discuss it from start, so for now I´m done only with around 1/4 of first lvl, but I uploaded an IPS file.

Sooo, this hack is going to have five levels, each of them has a theme of some fruit. I´ve thinked about various themes and I came up with...
-Banana level
-Strawberry level
-Apple level
-Orange level
-Lemon level
Each level ends in a room, when is a large picture of the fruit (that I´ll probably draw in YYCHR) and Green Goal Question Sphere. As I said, the hack will be mostly in vanilla style only with some little graphical additions.
All the levels shall be accessible from beginning, so they´ll be around equally long and difficult and it depends on a player in which order he´s going to play them. finishing of a each level gives a part of way to the final level, which shall probably be some sort of bonus level.

About the story...I honestly haven´t thinked about it much, but it´ll probably be something simple like "Mario decided to collect five legendary pieces of fruit etc.etc..."

Now about my ideas for the levels...

Banana level
The level I already started making...banana level will be obviously done in yellow and light colors. Firstly there´ll be area with yellow ground, pits, water, white rocks in background in background. Then Mario shall take a pipe to the underground section. In undrg. section I´ve only done the setting so far...it´ll be actually pretty similar, I´ve just changed sky color to yellow and removed clouds to make it look more like a cave. In cave section major threads shall be Banzai Bills and red lava-like liquid. After this Mario shall take the pipe, that leads up, to the area very similar to that, where level started and than there´ll be a pipe, that leads to the level finishing room.

Strawberry level
Similar to banana level in some meanings, but it´ll probably have some water ponds again, red foreground and woods in the background. Also in this level shall be horizontal and vertical area, where´ll be many uses of Growing Vine.

Apple level
Athletic level with clouds in the background and two types of foreground (red for red apples and green for green apples). I plan to invent usage of these donut lift things.

Lemon level
I don´t know much yet, but it´ll be a slippery level with lightly yellow water, which´ll represent lemon sauce.

As to overworld, which is extremely simple right now, I want to have all the hack on the one little screen with original palette of course.

So...here comes link for the ips file. You can play it and inform me about any issues you find. Feel free to open it in LM as well...

Sorry for my English...

Have an nice day

I would suggest posting screenshots. That helps people get interested in your hack as it gives them previews.

The Idea sounds interesting, I think I'll play it. See you around the forums.
c3 winter 2021 | music stuff | youtube

Actually I wanted to post some, but wasn´t sure, how to do it, and was too lazy to find out. 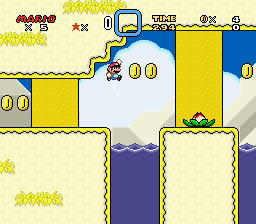 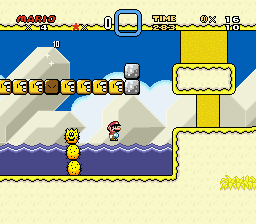 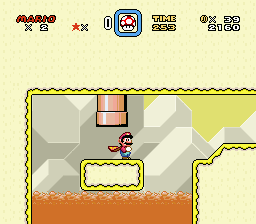 Other than that, it looks pretty good!
c3 winter 2021 | music stuff | youtube

Last seen: 39 minutes and 53 seconds ago

Posted on 2013-10-30 04:02:05 PMLink
I think you also can recolor the water to something yellowish but don't make it to cruel for the eyes as mercurypenny already statedMy Youtube channel

Many thanks for your replies, my friends. I´ve changed some colors as MercuryPenny and NGB suggested. 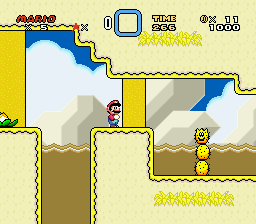 I was working on the Banana Level today a little, so here come some new screenshots as well. 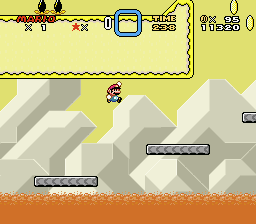 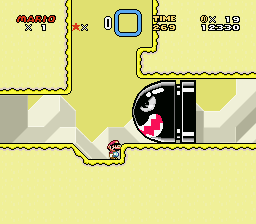 I´ll probably finish the level until end of the week, or in monday, so I´ll upload .ips file so you can play/check the whole level and tell me about the flaws or suggestions.

Posted on 2013-11-15 11:25:48 PMLink
I like the concept, although may I suggest using different fruits so that each level has its own color. For example, you might consider using lime rather than lemon to avoid making two yellow levels.

Last seen: 9 minutes and 34 seconds ago

Posted on 2013-11-16 01:50:46 PMLink
Yeah, that yellow is still kinda too bright. Try to darken all the colors of the land tiles a bit, by lowering the saturation. Yellow is a rather difficult color to work with, so be careful to not turn it into orange or golden.

Also on the other screenshoots remember to tweak the color as well; it's better if you make those dots in the dirt appear, as they make it less empty. Oh, and some grass decoration would be good too, if you think it fits.

Otherwise, the level looks fine, just a bit empty here and there. Do not put too many enemies in your levels, but don't make them lack enemies either, if you know what I mean.

Good luck, and have a nice stay on SMW Central! :D