Review:
I understand you probably did put a lot of effort on your hack, and I really appreciate it. However, I couldn't even have five minutes of gameplay of the hack because it crashed on the second room of the first level, when I unfairly died by one of the really fast banzai bills the game crashed and I couldn't proceed with playing the hack.


Quote
Your hack must be compatible with the newest version of all major emulators (ZSNES, Snes9x, bsnes).
Exceptions can be made if absolutely necessary so long as you warn players in the description, but easily avoidable incompatibilities (e.g. custom music) will not be accepted.
Now speaking about the level design of the hack, I'll need to say I didn't like it. While the design seemed to be acceptable, it was weirdly made and without inspiration. The enemies of the hack didn't help since they're way faster, I'll assume you made some tweaks on them, but it'd be nice if the player were aware about it on the hack's description. Some players would get stuck in the first level of the hack since the messages around the hack are in the Portuguese language, not English. It's not mandatory to you change, but they could be warned about it as well.

Verdict:
I'm sorry, but for now I'll stay with the verdict of rejection. Let's see if the userbase thinks the same about your hack. I suggest you to play more hacks around and make a better work on your hack.
Last edited on 2014-01-12 12:58:00 AM by Ringo

When you talk about the first level with the really fast banzai bills ("floresta de trauma"), it's actually the bonus level, because the real first level ("piramido do ninja") is way more reasonable than this one. Plus I'd like to highlight the fact that the banzai bill in this hack is called a "stronger".

When I played this myself (the version before it, very little was changed actually), it was the difficulty and the bosses that proved themselves to be the biggest problem of this hack.

The first level had two areas in which you had to backtrack in both of them to find this... 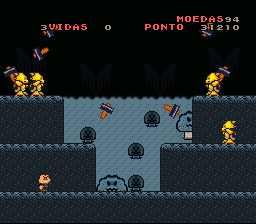 This is a boss fight. What you'll soon realize is that most of the bosses here are horrendously overpowered.

And there's another boss to fight after this one (SMWCP's Spiny boss).

And then here's the third biggest problem in the hack. Do it in one run. The hack has no midpoints in any of the levels. And this long one needs it real bad. 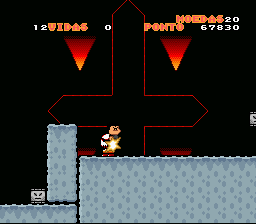 This enemy first showed up in "dia, e tarde a noite" or whatever. I think this is the second main level in the game (it's long too, with no midpoints). As you can see, this enemy can be bounced off of with a spin jump, meaning you can get hurt by jumping on it normally. First time I saw this enemy, I died just because of that. He shows up again in "castelo de momster" but I'm more careful since I know ahead of time.

And speaking of "castelo de momster"... 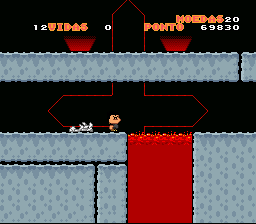 Yes, you're supposed to jump over that. Getting a running boost is out of the question since the Minskury there gets back up as soon as you jump on him. 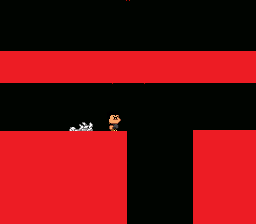 This is a literal pixel perfect jump. 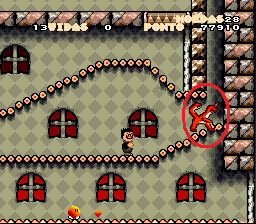 In "fortaleza de magma", this dinosaur enemy has a weird interaction with slopes. Once it reaches the top of a slope, it stays stuck there and can never move back down. In this case, it's a double whammy. If you don't move to the left fast enough (where Joi is now), you could get hurt or even get stuck with the dinosaur if you spin jump on him thinking he'll just walk back down. 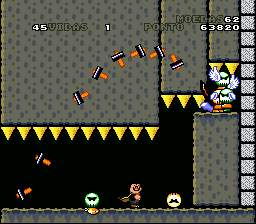 And while I'm still on the subject of O Ninja Negro, there's still the bosses. In the fight with King Muncher, there are SO many sprites that the game slows down to a crippling halt. Also note that you normally don't have a feather by this point and I got mine from my old version's save file.

And the dino boss in "deserto de dinows" is the best example of these bosses. The dino boss just jumps and makes tremors. Seems tame for this hack, but that's just about every time he lands! Once one tremor pins you on the ground, you're far past fucked. you can try as hard as you can to jump, but nothing will happen. Worst part about it is you can be caught in this tremor upon entering the boss room, before even figuring out what's going on in the first place. 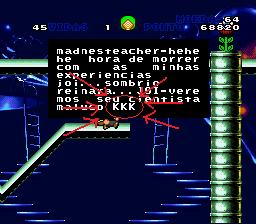 (during "laboritorio do mal")??? WTF ???
I think you can figure it out. I strongly suggest that you don't leave that in. Also, the "mad scientist KKK" in this level is a really good example of one of those overpowered bosses. I was struggling to beat him, using savestates.

One more thing is the "abaixo do agua" level. Given its tight corridors, you'll be waking the fish for sure. This means you have to swim as fast as you can without stopping to not get killed by the fish. This creates a paradox when Piranha Plants start blocking your path, unless you kill something with fire. So it's like pick your poison.

In conclusion, this hack suffers from insane difficulty, especially during boss fights. There's also no midpoints, so dying to an end of level boss (whether you saw it coming or not) resulted in you replaying the entire level, regardless of how long it was. There were few low blows here and there as well. It took me a long time to go through all this, but you know what I'm thinking.

Posted on 2014-01-10 02:09:08 PMLink
Not really able to play stuff right now, but for instance, I'm pretty sure that that "KKK" has nothing to do with the racist group or whatsoever. In Portuguese multiple K's represent a giggle over the Internet.

Design wise, this hack could do with some improvements. There's plenty of time to do that, though, so don't be discouraged! Some levels have particularly strange setups with sprites that make it quite difficult to dodge certain enemies. This was achieved by a mixture of tight corridors, an an abundance of enemies in a particular area, challenging enemies in early levels (The Divine Koopas), or screens in which it is difficult to maneuver around the enemies. The actual level design itself is decent for the most part, but issues with playability regarding certain sets of enemies (and objects, which will be explained further below) ultimately drag this hack down.

Moreover, there were also certain obstacles in levels that were either not apparently that they were solid or not, or alternatively obstacles that are extremely cumbersome to navigate through. An example of the latter would be the cement blocks in which you had to use your fire powerup in order to destroy in the pyramid level. There's mild slowdown, and other minor minor issues like cutoff, which is present in a select few levels and the bosses in this hack.

In conclusion, I agree there should be work done on this hack to improve it. I feel that the design is OK, but hasn't been extensively tested by the author. This is supported by the fact that the hack is labelled as having "Normal" difficulty whereas the cheapness of certain enemies, bosses and objects make it unreasonably difficult. I recommend, for the author, to hire some Beta Testers in the Testers for Hire thread to get a more detailed outlook on what needs adjusting on this hack for the next release.

Best of luck in the future, but for now I feel this hack needs to be Rejected

Posted on 2014-01-11 06:18:10 PMLink
Played the hack, and, honestly, I didn't liked it much.
In terms of level design, it was repetitive, flat and boring in most of the levels. There is also bad sprites placing, that caused glitches (in the case of the Spike Top) and major slowdown.
Some levels felt more frustrating than fun. My biggest complaint would be the weird difficulty curve: the difficult is supposed to be Normal, but the first level was way too hard (maybe more unfair than actually hard, mostly because of some tweaked enemies, placed in wrong spots, as said before).
Graphics were decent I guess: just from looking the screens I was really happy to play as someone different from Mario. This is a really big plus, because it makes your hack unique. Same goes for sprites and level GFX, although there are lots of clashes, cutoff and bad palettes that made the overall unpleasant in most of the levels.
Minor things already said by other users are the uncompatibility with major emulators, and the different language: while I like portuguese, I couldn't understand the plot at all. Story is important in hacks, so I vividly suggest you to use an English language.
Overall, I don't like this hack. While I really enjoyed the idea of having a hack based on a new character, there are too many problems that makes me reject it. I hope that this won't discourage you, and that you will do everything possible to fix the bad points.
Good luck, I'm looking forward for the fixed version~

Posted on 2014-01-12 12:06:09 AMLink
Ok no, just no.
Sorry, but I really can't stand this hack. The later levels have a constant slowdown throughout the WHOLE levels.
As for the level design, most levels had a rather flat one. I don't know how others see it but the 3rd level (if I'm not mistaken) the water one, was basicly just a tunnel with some fish here and there and lots of unpredictable torpedo ted launchers.

The edited sprites are somewhat nice, giving the the whole thing a new touch, like in the first level the faster banzai bill and the rexes, even though some of the banzai bills are somewhat unfair.

There also seems so be a lot of item-babysitting near the beginning of the hack. Especially the P-switch one was rather annoying (I think it was the second level) not just because the level was long and the backtracking was boring, but also because I collected the coins at the beginning and thus could no longer get up there... so redoing the whole level again and again for the backtracking.

Also some of you're custom sprites are rather buggy, to the point where they try to stay on ledges and then, uppon reaching the top of a hill, are stuck there constantly turning over.
This instance here hit me really hard, because I uses a spinjump to avoid the enemy and due to it getting stuck below me, I was stuck too...

As for the custom bosses. Maybe it's just me, but having a boss at every level doesn't seem like that good of a thing. Granted, the bosses are somewhat different from each other, but stull I just don't like them :/
They all take a fairly large number of hits to defeat without any change in attack pattern.


Final verdict, sorry but I'll go for reject.
For future hacks, try to get in a little more varietty as well as LESS slowdown.

Posted on 2014-01-12 12:59:48 AMLink
Final Verdict:
The hack has got the verdict of rejection. I'm sorry. Hopefully you'll look onto everybody's reviews in here and get to fix the issues on your hack and make it look acceptable for the next time you consider submitting it again.