STORY (OR LACK THEREOF)
Bowser kidnaps Peach yet again and flees to Sugar Island, knowing Mario will give chase. He (naturally) has his troops waiting for the portly plumber when he arrives.

WORLDS
Sugar Island is divided into seven regions, with an eight being Bowser's hideout. These regions are:

Taking the high road for some coins

Not much going on here.

The second level introduces sliding Koopas, as well as Rexes and tileset mixing.

There's bound to be something good in one of those blocks.

These Rexes are probably best dealt with by using fireballs.

Here's a glimpse of the World 1 section of the main map. You can see the edge of Jelly Jungle above.

This is the first athletic level of the game, as well as the first with a secret exit.

Out of my way, Galoomba!

Since this level is covered up by a tree before being unlocked, I figured I'd set it in a wooded part of Pistachio Plains.

So far, this level is halfway done.

This level introduces slanted ledges, as well as Monty Moles.Quintesson Judge: Silence, or you will be held in contempt of this court!
Hot Rod: I have nothing but contempt for this court!
- Transformers the Movie (1986)
Last edited on 2015-06-06 06:02:52 AM by Gamma V

Last seen: 59 minutes and 19 seconds ago

Posted on 2014-03-27 05:26:30 PMLink
Looks really awesome! Liking the palettes as well and I can notice the level design is typical from you. There's only one thing I noticed...

There's a wrong corner tile at the ledge.

Aside this, I'm looking foward for more!

Posted on 2014-03-27 05:57:14 PMLink
Thanks for pointing that out. Sometimes, when I think I'm placing one object/sprite, it'll turn out that I've placed multiples, one on top of the other. This is much more noticeable with sprites than with objects. Either way, I fixed the bad tile.Quintesson Judge: Silence, or you will be held in contempt of this court!
Hot Rod: I have nothing but contempt for this court!
- Transformers the Movie (1986)

Last seen: 9 minutes and 23 seconds ago

Posted on 2014-03-29 02:04:04 PMLink
Jeeze, do you just poop SMW hacks!?
Anyway, looking good. Those palettes look nice and they give it a new atmoshpere with it being vanilla.My layout has removed you.

The levels look nice, not much to say really as they're normal world 1 stuff. I like Pistachio Plains 4's palette personally. Guess that's another hack I'll look forward to.Usually inactive/procrastinating on a hack idea.

First up is a video of the completed Pistachio Plains 4.

Next up is Pistachio Plains 5.

This level introduces Spinies, but most of them can be fairly easily avoided.

You can get this Yoshi Coin either by jumping off the Parakoopa or by backtracking from a ledge that can't be seen in the screenshot.

Staying on the low road will net you this Yoshi Coin.Quintesson Judge: Silence, or you will be held in contempt of this court!
Hot Rod: I have nothing but contempt for this court!
- Transformers the Movie (1986)

Posted on 2014-03-31 04:55:20 PMLink
This looks quite nice. Good work with the palettes, I especially like the nighttime look of Pistachio Plains 4. I also like how you kept up with the food-themed world names and used alliteration for all of them.

Last seen: 9 months and 4 days ago

Posted on 2014-03-31 05:27:24 PMLink
Indeed, this looks like a lot of fun to play. Great choice of palettes, and the level design looks like something out of an official Nintendo game.

The screenshost provided so far sure makes me interesed to see where this is going and how the caves/ghost houses and castles will appear.

This is another athletic Mushroom Platform level.

This level introduces moving platforms, as well as flying parakoopas.

If you kick a shell up into the high turn block, you can sprout a vine that leads to a Yoshi Coin.

The first half of the castle is pretty basic, and the Thwomps might be the toughest obstacle.

It also introduces some Ball 'N' Chains.Quintesson Judge: Silence, or you will be held in contempt of this court!
Hot Rod: I have nothing but contempt for this court!
- Transformers the Movie (1986)

Posted on 2014-04-30 06:28:02 PMLink
Another hack, Gamma V? Awesome, you never fail to impress everyone with your amazing hacking skill. Keep it up!I don't even know what I'm actually doing anymore... will I ever finish a hack?

I know it's been a long time since I've posted in this thread, but I was waiting for SOMEONE to reply so I wouldn't have to double-post. Either way, the first four levels of Coconut Coast are done.

COCONUT COAST 2
Coconut Coast 2 is the first fully underwater level of the game.

GREEN SWITCH ZONE
The Secret Exit in Coconut Coast 2 leads to a tiny island that houses the Green Switch. This level is mostly based on sprites in bubbles.

VIDEOQuintesson Judge: Silence, or you will be held in contempt of this court!
Hot Rod: I have nothing but contempt for this court!
- Transformers the Movie (1986)

However, what's with those red cave pieces? Are they supposed to be crystals of some sort?I don't even know what I'm actually doing anymore... will I ever finish a hack?

Posted on 2014-05-09 05:07:21 PMLink
Originally posted by RainbowShell
Again, these levels are looking awesome and fun to play.

However, what's with those red cave pieces? Are they supposed to be crystals of some sort?

It's supposed to be coral.

Good lucky on the project!C3 Over.

Posted on 2014-07-10 04:59:17 AMLink
Yes, it's been a long time since I've worked on this, but, with C3 getting closer and closer, I figured it was time to get back to work after taking a break to work on my Sonic porting project and play Chrono Trigger.

Anyway...World 2 is almost done, which means you guys can expect to see a demo during C3!

It's another underwater level, and it introduces Urchins.

Jumpin' Piranha Plants underwater? Why not?

It's night-time now, and the Spinies are running amok!

Most of the Spinies in this level will fall from the trees, so heads up!

Getting the secret exit in Coconut Coast 4 unlocks this coral-filled, tide-ridden cave.

Where there's water, there are always fish.

The Title Screen is pretty simple. A custom sprite was used to render Mario invisible. Bowser is actually part of the foreground, and the propeller on his clown copter is animated.

We also have some Pokeys here. There won't be a desert world in this hack, but that's no reason to leave them out since they can work in beach levels too.

That Yoshi Coin was actually spawned BY the ? Block it's sitting above.

VIDEO OF COCONUT SECRETQuintesson Judge: Silence, or you will be held in contempt of this court!
Hot Rod: I have nothing but contempt for this court!
- Transformers the Movie (1986) 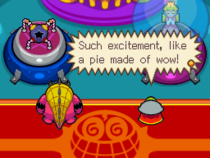 "I HAVE FUCKING HAD IT WITH YOUR SHIT. You little fuckers are going to have your bodies ripped in half. I'll shove your asses so far down your throats that when you crap, you'll sing fucking Beethoven. tl;dr: Eat shit, faggots."
-Dr. Andonuts, Earthbound

Posted on 2015-02-17 04:48:51 AMLink
It's time to make like B2K and Bump Bump Bump this thread because, with Mario & Luigi: Kola Kingdom Quest finished (providing it doesn't get rejected, which doesn't seem likely), it's time to pull Bowser's Cataclysmic Trap off the back burner after not working on it since releasing the demo during Summer C3.

First up, here's a glimpse of the map of Cookie Cavern.

Next, it's time to take a look at Cookie Cavern 1.

Monty Moles make a comeback, but they're in an enclosed space this time.

Some Monty Moles stay in one place, but constantly throw rocks at Mario.Quintesson Judge: Silence, or you will be held in contempt of this court!
Hot Rod: I have nothing but contempt for this court!
- Transformers the Movie (1986) 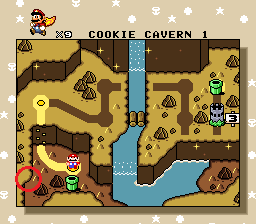 This is a good submap, however the area in the red circle looks a little strange.

On a more positive note, the new level looks fun and I'm happy to see this back. I like the idea of the rock-throwing Montys.

I don't even know what I'm actually doing anymore... will I ever finish a hack?

This level introduces Swooper Bats. This guy is sleeping, and he doesn't want to be disturbed by a fat guy looking for his kidnapped girlfriend.

Again with Yoshi Coins coming from blocks. I kinda wish the custom block I used could be triggered by kicked shells like other blocks, but it can't.