Sicari Remastered - Coming this C3 (for real this time!)

Posted on 2015-04-10 09:48:45 PMLink
I've been playing a bit with the Demonia level, now named "Bloodied Wastes." I really liked Sako's suggestion about the lava filled cracks, and I did try to make the foreground stand out a bit better. During some tests with different effects, I think I achieved the opposite, but it's an effect I could utilize as some sort of gimmick. This level now has a darkness effect, and the closer you get to the bottom of the screen, the harder it is to see. There may be a few hidden items so keep your eye open. Watch your step, and be very cautious.

Here's what I've got. 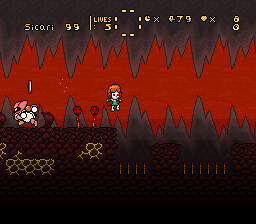 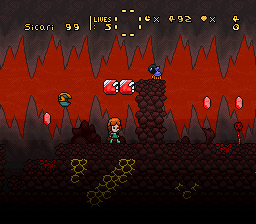 Edit: forgot to mention, I made the red BG a bit darker so it didn't look as odd

If the names are not enough indication, one only needs a quick pic on the images to see how hardcore is getting.

You better make us suffer with those levels too!!


So good so far. Impecable as always

Posted on 2015-04-10 10:03:23 PMLink
Suika Ibuki - 25107
oh
my
god
I remember peeking on this level on a demo you sent me and i can say the music gives a really creepy feel, those yellow things looks really awesome too, i still think you should use ExGFX to change the sprites of koopas and stuff on this level but meh.
Good job as usual, Demonia has to be my fav world so far lol.

Also, it's good to see that you've added some lava filled cracks as ground decoration. However, you should change their yellow color to something more red, both to make it look more like lava and fit more with the level in general.


Originally posted by E-
Also, it's good to see that you've added some lava filled cracks as ground decoration. However, you should change their yellow color to something more red, both to make it look more like lava and fit more with the level in general.
...I agree with this pretty much. Moreover, if you have more colours free, you could do some shadings so that it doesn't look so monotonous.

Nice job anyways! Keep it up.

Last seen: 38 minutes and 55 seconds ago

Posted on 2015-04-11 05:06:42 PMLink
The lava and rocks definitely give the vibe of a heated place; and I agree with Eminus as far as the lava cracks go; you can always exanimate them via palette to make them go from red to yellow too. I don't like the thin bone-bridge too much because I don't see how bones that thin can support her weight... now if it were a lot of bones, that'd not only be a different story, but would look better all together. I also don't know why, but the level feels empty. Lack of decor maybe?
Why hasn't anybody made ledge grabbing and crawling ASM yet? 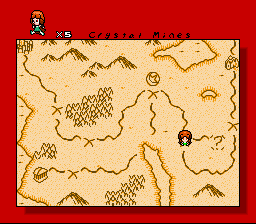 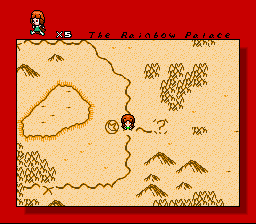 This time, I've drawn the OW tiles as if they are drawn on an old sheet of parchment. The levels are represented by crosses (like something that has been marked onto the map), castles are represented by... well, castles, and palaces are represented by the Deity Symbol. This is not quite finished however: My plans are as follows:
-Replace Sicari's sprite with something more fitting. (Although K-16 did show a robot walking through space, soooo)
-The paths will be revealed from the start. A cleared level will be signified by a blue flag (not yet implemented)
-Stylize the border like in K-16. It will most likely show a table or something like that.

The overworld is separated into different submaps unlike in the original hack These are:

There's also something new you may notice. Something I haven't revealed yet.

Now I think some things could make it look even more awesome. First would be border, which you will do anyway.

The other would be adding details to make the map more like it looks. For example, it reminds me of the old treasure maps cliched a lot. Why don't add details like if it got dirty, o slightly burned? As if it was old. I would like that.

Another masterpiece!! In progress at least, lol.
Read my posted story here!!.

The forests and the mountains are good looking, and they are enough to make the environment quite varied (I can't think about any other decorative element anyway).
I'm looking forward to see your OW plans finished, good luck with that!

Posted on 2015-04-13 05:23:08 PMLink
Today we will be talking plot! As I may have mentioned before, the plot will be more detailed than that of Sicari or K-16 - Story of Steel. Although this is a remake, I have taken liberties, and expanded on the story that the original told. One of the biggest changes is our villain, Niscura. The Goddess of Dimensions and Manipulation, Niscura in the original hack rarely had any screen time, only appearing in two cutscenes and the final boss. This time however, she has much more prominence in the plot, and with that comes her new form.

This is how she will appear starting about halfway through the hack.

This is a result of her attempting to bring over her old power from Demonia in order to become stronger and more terrifying. What she fails to realise however, is that in the mortal world, Immortality does not exist. Sicari's mission is to take down the five cultists who are helping to give her power, so she can easilly take down Niscura herself.

With that, I'll also show off the first cutscenes I've shown for this hack. They are more or less the same style as in K-16, but there is more space for text. 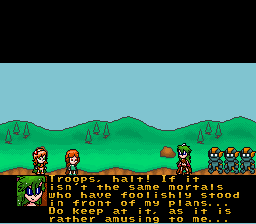 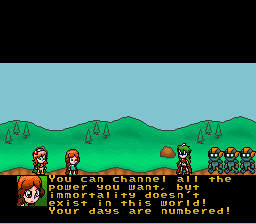 That's all for today, please comment and give feedback! :3

Posted on 2015-04-13 05:31:45 PMLink
Wow!! Niscura finally looks like a complete true evil deity!! She has all that goes on her!! The ravaged hair, some dark and powerful looking eyes (those eyes are amazing), something to show how dangerous she is (her nails), skimpy clothing. She has become a true villian, a true darkness. A true BADASS!!

And also... how better way to show how badass you are that allowing the heroines to continue doing her foolish acts of trying to stop her? SWAGcura indeed!!

Posted on 2015-04-13 09:21:23 PMLink
You seem to work really hard on your hacks. I mean, I haven't been checking this thread as often as I should have (but the stuff you showed on the IRC was cool) and a lot of this stuff looks really nice.

Cool graphics and overworld as well. That desert thing looks especially awesome (and the fact it looks like a literal 'map' is an interesting idea as well). You drew all that yourself?

Anyways, I normally don't play hacks too often, but I might actually give this one a shot when it's done.Twitter
The handomest people in the world are ones who follow my Twitch

Posted on 2015-04-15 03:44:39 PMLink
So I've went ahead and began to extend some of the levels. "Techno Time" or "Cyberspace Run" was very short, so that one has an entirely new room added to it. Here's a little screenshot from the new section. 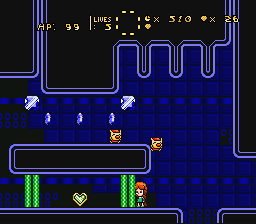 Poor Sicari. If only she had a way to reach that 1-up.

...but someone else does. 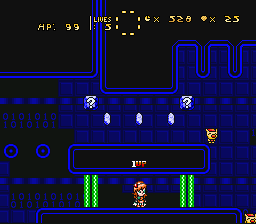 Seems like K-16 has no trouble passing through those scary radioactive beams!

Yes. You heard me right. K-16 is a playable character in this hack! 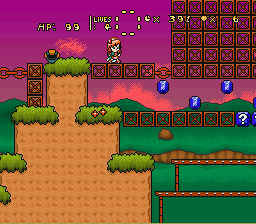 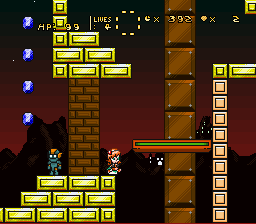 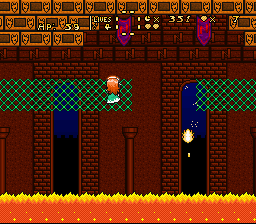 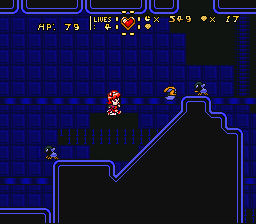 Switching characters is as simple as hitting this block that you will find at the beginning of most levels:

As of now their gameplay does not differ, although there will indeed be forced switches and alike.

Anyway, please comment and give feedback! Who will you be playing as? Be sure to say!

I really, REALLY love K. She's the best. And having her back again... feels me with such joy.

Last seen: 38 minutes and 56 seconds ago

Posted on 2015-04-15 03:51:13 PMLink
I already played through the whole of K-16 as... er, K-16. So I plan to play through this as Sicari when I begin my playthrough of this, for as long as possible anyways.
Why hasn't anybody made ledge grabbing and crawling ASM yet?

It's nice to see K-16 as a playable character, she won't stand there saying stuff to Sicari, like in the original version...

And she's wearing that sexy cape, nice. I like the idea of switching character to have access to specific things, keep it up!

this is breathtaking! I adore how you did the graphicsI do art commissions cheap! PM here or DM via Discord for more details.