Also, I started working on the (still unnamed) level yesterday. Here are some screenshots:

Those are really big though... that's not too good for you.

"Woah, I'm trapped! And where does this pipe lead to?" 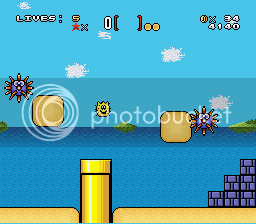 Another mini-boss, with a 1-Up as a reward.

Currently the end of the level. Use the throw block to kill the Urchin.

Posted on 2008-11-18 08:43:07 PMLink
Looks pretty nice. There seems to be plenty to do in that level. The only thing that seems awkward is having Urchins above water. I'd maybe change that miniboss section to an underwater portion as well. But that could just be me.

And you do notice the hole in the FG of the last underwater screen, right?

Posted on 2008-11-19 08:50:31 PMLink
Thanks! Yeah, I'm aware of the hole in that screen - I just haven't made any more of the level yet. Of course I'll fix it when I continue working on the level. ;) Regarding the urchins: I don't really think they only fit in an underwater area - I recall some hacks, like SMTKO, having Urchins in an above-ground area.

On a little side note, I haven't done anything for the hack today - Too busy with school stuff.

Anyway, that level is looking really cool - I'm really a fan of underwater levels, probably because they're very unlinear - and me lieks unlinear levelz.

Oh, and also, I meant clouds on Layer 1, just as like as the fake HDMA effect that you added there - it's layer 1, right?

Yeah, but in my opinion it would look too cramped with all that stuff - Fog, Water, HDMA effect and clouds.

By the way, the level is now called "Torpedo Bay", as you'll encounter a lot of Torpedo Teds here. I'm still open for suggestions though, so if anyone comes up with a better name (which shouldn't be too hard >_>), feel free to tell me.

The upper path leads to a layer 2 scrolling level! You'd better hurry if you want to get the P-Coin. Oh, and does the fake HDMA effect at the top look nice or irritating?

(I'm aware of the cutoffness)
There won't be any sprites in this portion of the level, as they won't show up (probably beause of layer 2 or something) - unless anyone knows how to fix that.

The right path leads to a beach. Nothing special to say here.

Ooh, how do I get to that P-Coin? How tough.

If only you had hit both switches... (Yes, the blue one is necessary too, it's found in the level before that.)

Posted on 2008-11-23 07:20:21 PMLink
I love layer 2 scrolling levels as those<3
I like your ideas for that water level. It looks unlinear, and even though i hate water levels, your level seem to catch my interest.
I like the fake hdma, it gives me a kind of "theres the surface" feeling. If you could make the hdma a bit longer, and make the bg scroll slowly down, it would be perfect.aran - Graces of Heaven
Last edited on 2008-11-24 02:45:12 PM by Incognito

Posted on 2008-11-23 09:10:07 PMLink
Really nice screenshots you got there, WhiteYoshiEgg - "Torpedo Bay" is looking way better than before, as now there are multiple paths within it. I also loved the layer 2 part of the level, although I didn't like the fake HDMA that you're using there - I guess it's just me, though. The beach part is also looking good. I have a small question regarding the beach part, though: Do you really need to hit the switches in order to beat the level completely, or do you need them to access a sort of bonus area in it? Well, I'm asking this because if you have to hit them to beat the level, it would be a bit odd, at least in my opinion - I guess you could leave it for an extra/special world of the hack.
Last edited on 2008-11-23 09:10:42 PM by Broozer

Posted on 2008-11-24 12:30:57 PMLink
Originally posted by Broozer
I have a small question regarding the beach part, though: Do you really need to hit the switches in order to beat the level completely, or do you need them to access a sort of bonus area in it?

They're only needed for the secret exit (the blue pipe leads to the goal point). Requireing switch palaces in order to continue is a pretty bad idea. ;)
By the way, I'm not too fond of the fake HDMA as well. I'll probably remove it, I just wanted to know what you think.

I changed the vertial part of Torpedo Bay a bit... Now you can see the power star, but you have to get to the top of the level to get it. I had to build the level that way since pipes or sprites that are not on the starting screen refuse to work for some reason...
I know about the glitched goal sphere / star, thanks.

The level "Switch Lagoon" on the overworld.

Good thing you brought the springboard!

The next part is... a sunken switch palace! Filled with randomly-placed coins.

Overworld looks to be in good shape as well. Oh, and an underwater switch palace is win

. I don't recall anyone ever doing that.

@WYE: I totally agree with GY, the new vertical area of Torpedo Bay looks amazing! This level seems really unlinear, and this makes me smile.

The overworld, as GY already mentioned, are looking really nice too - they're definitely in a good shape.

The level shown in screenshots #04 and #05, however, needs more decoration and enemies. I'm not sure if you're aware of the lack of enemies/decorations in this level, though.

The sunken switch palace, however, is looking neat! I'm also glad to know that people are using my underwater background in their levels. I would only suggest to change the palette of the foreground... the regular palette of the switch palace's floor is kinda last season IMO... go for something more colorful. It's just a suggestion, though. ;)

Posted on 2008-12-05 09:21:39 PMLink
Originally posted by Brrrrrrzer
@Golden Yoshi: If I recall correctly, Dispari Scuro did something similar to that in Super Mario TKO. I'm not 100% sure, though.


Oh yes, how could I forget that one? Well still, it's good to see people trying different ideas for their switch palaces. It'd be nice to see even more variety for them as well

It now has decorations and enemies.

I also added new decorations (and a new palette) to the underwater part!

For some reason, the last screen in my last post was a screenshot of the OW again... Here's what I actually wanted to show.

You are aware of the dicoloration of the dirt near the latter, right?

You are aware of the dicoloration of the dirt near the latter, right?

Yes, I am. I haven't gotten around to changing the GFX yet...

Posted on 2008-12-06 04:16:02 PMLink
The new level is looking much better now, and so is the sunken switch palace. I also liked the broken walls that you added as a decoration in the switch palace - that surely gives an abandoned feel to it, which is great.

New OW Level Names system. Should I keep or remove this?

Hmm, these blocks dont look safe to walk on... Do I have to hit the switch, perhaps?
(The blocks are ExAnimated, by the way)

Too bad I had to hit the switch... Now these blocks aren't passable anymore! I guess I have to find another switch.