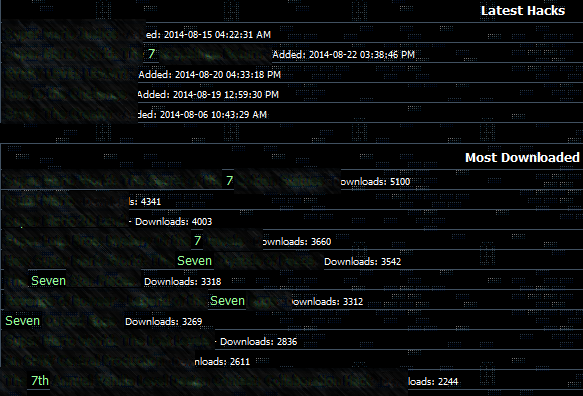 Last seen: 13 minutes and 58 seconds ago

Posted on 2014-09-16 12:08:09 PMLink
Yeah, the Most Downloaded sure are filled with 7's. I'm actually surprised to see some of these hacks in said list. I mean, never heard of some of these before. It's probably a not-funny-at-all-spam-download-button joke.

As for the trend in naming hacks "Mario and the 7 *inserts whatever stuff*", it could be SMRPG's fans doing (y'know, 7 stars...). Also, there were 7 Yoshi eggs (or castles) in the original game, so I guess some hackers would feel more comfortable sticking with the same style of progression of SMW.

Mmmmm, I have a feeling it might be a subconcious decision to put the 7 in there based on those things. I'm sure 7 gets used quite a bit in the games, though I can't think of any examples at the moment


Originally posted by Torchkas
What about "Vanilla" or "Adventure".
Or hack stories revolving involving Mario being on vacation at some point

Posted on 2014-09-16 01:43:18 PMLink
"Super _____ World" comes to mind.Legacy custom music
A site where you can watch my YT videos AND be able to hit that dislike where your dislike will be visible to other people and not have to rely on a browser extension

The air is getting colder around you...

Posted on 2014-09-16 01:54:48 PMLink
A lot of them hacks that revolve around 7 things to collect are probably using the vanilla Castle Destruction scenes with a graphics swap for the egg (and deleting the "Thank You" graphics).

Also, there are 7 Star Road Pieces, 7 Star Spirits, 7 Koopalings, 7 Crystal Stars, 7 worlds before the final world in most games, etc.

I suspect the word "Mario" might show up often, too...

Posted on 2014-09-16 04:31:26 PMLink
I actually noticed this the other day. I have decided to rename Mario's Pizza Delivery to "Mario and the Seven Pepperonis - The Vanilla Adventure".
Super Mario: Star Seeker

Aslo, the number 7 is present a lot in the video-game and anime culture, not just in Mario: 7 dragonballls, 7 chaos emeralds, 7 milenium items, 7 sages, and a lot more. It shouldn't surprise us that with so many stuff with the number 7, hackers decided to use that same numbers in their games as well.


I also know that the number 3 is also used quite a lot.
Want progress on 100 Rooms of Enemies: The Nightmare Edition? Go here to see.

it is good your hacks have been blessedVery very very shortly, this drab, workaday world and everything in it will be changed forever! Follow us into the golden country, into the empire of the senseless!

*looks at title at own hack*

Damn it. He caught me.

I mean with anything, of course you're going to have trends in naming and such. How many titles have you heard that had the word "blood" or something in it?Click here to enter the world of mediocre!

Jokes aside, I never notice these kinds of things until someone points them out. Maybe I don't look at the hacks section enough.
c3 winter 2021 | music stuff | youtube

I can't really talk as my series is literally called Super Mario World only with added "" marks...

Lots of hacks also use "New Super Mario" or "The Lost levels".

Posted on 2014-09-21 01:40:32 AMLink
And Nintendo themselves has called their seventh Mario Kart game Mario Kart 7 (although 8 follows this trend as well) and put in an item that gives you 7 items (and an equivalent for 8 that gives you - wait for it - 8 items).Kinda in hibernation for a while. I hope to be back in full swing soon.


Originally posted by Daizo Dee Von
There's also the SEVEN deadly sins, so the number 7 is all over the place even outside of video games.
Oh man, Judeo-Christian Mythology just loves their sevens. Seven Archangels, Seven Seals, Seven Trumpets, Seven Bowls, Seven this, Seven that.
Religious slop aside, let's not forget "7 Girls, One Bucket".

Also, reading the word "seven" in this thread so frequently is turning it into a strange word to look at for me.My layout has removed you.