Posted on 2015-06-27 07:24:36 AMLink
Originally posted by MercuryPenny
That's quite creative! It looks great, but maybe the gradient could be smoother.
Thanks! I agree. I will make some smoother and more varied gradients in the future.


Originally posted by ForthRightMC
These screenshots are very good, but I think it's great! Has this hack got custom music?
Thanks for the compliment. This hack will include custom music!

Originally posted by G.n.k.
I love the atmosphere here. It can be quite difficult to pull off something like this with vanilla graphics, but it looks perfect to me. A video of that layer 2/3 in action would be great..

A mockup level to make it more interesting and provide a better idea of what the BG will look like with substantial foreground. I'll make something better for a real level.


Originally posted by Agent Q
These screenshots tickle my pickle in too many good ways. Really looking forward to this.

Just one small thing is kind of bothering me. 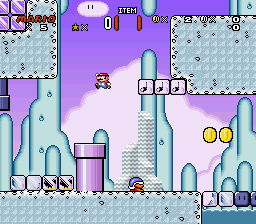 I think there's too much going on in the background here. Particularly the wavy ocean hills seem out of place.
Thanks! I've heard a few people say that those water BG rocks make the level too busy. I may remove them completely, if not just make them very sparse. Layer 3 does add a lot to look at as it is.
Last edited on 2015-06-27 07:27:01 AM by Yoshi Master 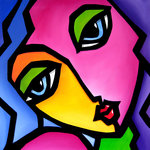 Posted on 2015-06-28 06:08:38 PMLink
Originally posted by S.R.H.
I dislike this one a bit. Everything looks great, but not that. I think it's because the background stands out too much. You can try removing the dark outlines in the background. 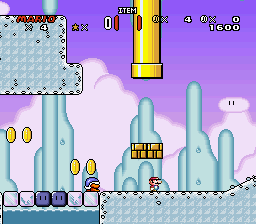 I agree with you there. It was a vanilla SMW palette, but sometimes every bit needs a little personal love. Is this better? It's definitely an improvement.Hacks:
- 3+World (Cancelled - Download Available)
- Super Mario World Beta (2009)
Last edited on 2015-06-28 06:10:03 PM by Yoshi Master

Last seen: 12 minutes and 17 seconds ago

That BG in the GIF you showed earlier is really awesome! I'll have to keep this thread in mind

Keep up the good work!

That BG in the GIF you showed earlier is really awesome! I'll have to keep this thread in mind

Keep up the good work!
Underway! Thank you. Big fan of your work, so it means a lot you like what you see. You know how to carry the SMW feel, so I'd be curious to hear if you have any suggestions.

So, a new background I made just the other day Using more Layer 2 and 3: 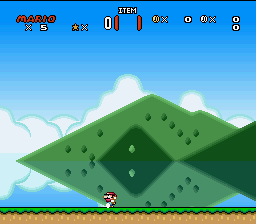 I like how it turned out, but it feels incomplete without a proper HDMA wavy effect. Anyone know how to get that effect on only half of layer 2 and 3? Preferably a gradual wave that fades as it goes up to simulate water. I also seem unable to retain gradients with effects, but that's almost an other issue entirely. Any suggestions?Hacks:
- 3+World (Cancelled - Download Available)
- Super Mario World Beta (2009)

Posted on 2015-07-01 03:31:32 PMLink
Actually, some palette work to make it more faded on the bottom would make it actually look like a reflection. It looks more like floating islands and hills which looks odd.

There is an extremely small difference but it's almost unnoticeable.
c3 winter 2021 | music stuff | youtube

Posted on 2015-07-01 05:52:47 PMLink
Originally posted by MercuryPenny
Actually, some palette work to make it more faded on the bottom would make it actually look like a reflection. It looks more like floating islands and hills which looks odd.

There is an extremely small difference but it's almost unnoticeable.
+1
Was about to post this.

Also, your saturation gradient doesn't make sense. It goes from desaturated to saturated where it should be saturated to desaturated.
Other than that, it's pretty good.
Last edited on 2015-07-01 05:53:01 PM by S.R.H.

Posted on 2015-07-01 06:50:30 PMLink
Originally posted by MercuryPenny
Actually, some palette work to make it more faded on the bottom would make it actually look like a reflection. It looks more like floating islands and hills which looks odd.

There is an extremely small difference but it's almost unnoticeable.
I see that now that I'm looking at the small image. I'll tweak the palette some to make it more noticeable. The wave effect I want will also help with this.


Originally posted by Mindevous
I would LOVE to see this in a .GIF.
I was going to post one, but I really wanted to wait until I added the HDMA wavy water effect.


Originally posted by Berkay
Also, your saturation gradient doesn't make sense. It goes from desaturated to saturated where it should be saturated to desaturated.
Other than that, it's pretty good.
Do you mean in the previous screen with the water reflection? That gradient should make sense. Basing it off of a standard daytime sky, it should be from light up to dark. Like this.Hacks:
- 3+World (Cancelled - Download Available)
- Super Mario World Beta (2009)

Posted on 2015-07-01 10:51:07 PMLink
I can't believe I didn't get around to commenting earlier.
If anything, I've seen bridging of classic Nintendo titles before, but these are some of the most creative visual choices and environments I've seen in a while.
I came here not expecting the reflection in the water nor the HDMA gradient to be used as an ocean.

Posted on 2015-07-01 11:04:19 PMLink
Originally posted by Yoshi Master
I like how it turned out, but it feels incomplete without a proper HDMA wavy effect. Anyone know how to get that effect on only half of layer 2 and 3?

Incognito made this, you could try asking him for the code.

Incognito made this, you could try asking him for the code.
Hahaha!
No such thing as original I suppose! Thanks Mindevous, I'll ask him about it! And maybe alter mine a bit...

And thanks levelengine! I do try to utilize all that I can. Especially if I can use it to cut corners and still have it look good, like the hdma ocean.Hacks:
- 3+World (Cancelled - Download Available)
- Super Mario World Beta (2009)

Userbar made by Green Jerry

It's been a long time since I've been able to even look at Lunar Magic ever since my life has gotten so busy. The friend I had working on this with me lives in another state nowadays. Adult life is real, so I am officially cancelling this long forgotten project. Yeah, I'm one of those hackers now. haha In case anyone is interested, I am going to put up the latest build for download, and explain what my idea was in concept and story! The hack is open and anyone may use the resources. If anybody were to continue it, I'd gleefully let them do so.

Download the Final Build Here
Be sure to check every level! There's some fun design and themes, as well as some weird experiments. The rom also works on a real SNES, which I play every so often. Please play it, use the resources, and let me know what you think. I'm still curious after all this time, and I'd love to hear what you guys think of my old project.

The games core concept and inspiration is mentioned in the original post, so I'll just explain my idea for the story. Or, at least what I remember of it.

Story
At the beginning you were to replay the ghost ship level from Super Mario World (with updated graphics). Once you reach the Goal Point Sphere, rather than ending the level, there would be visions of the new villain in this hack, an Obsidian Castle, and Mario would awake in his bed from the nightmare.

Mario has been having the same nightmare for weeks now, and you find out Mario still has the sphere from that ghost ship. He wishes to find the Obsidian Castle with the Orb to get more answers.

Mario finds the Obsidian Castle. There he learns that there are more of these orbs, and they can be found on other crashed Doomships not far from Dinosaur Land. Turns out Bowser and the Koopalings were collecting the orbs, and the boos crashed these ships to protect the orbs. Bowser was going to use them to bring back the "King of Ghosts" (I forgot the name I gave him). Mario must find and return these orbs to the Obsidian Castle to be sealed away.

The "King of Ghosts" Concept

Each crashed Doomship was to be sort of the "castles" of the hack. One encased in ice maybe, another suspended in the air in pieces by Boo magic or something. There would be a fight with this "King of Ghosts" in the undeworld once all of the Orbs were collected. I forget why, but it my head it sounded cool. I suppose this is all I can recollect!

Its a shame its not finished by you as your ideas seemed really cool and it would be awesome to see how it played out.

Wish you all the best with what you are currently busy with and I'll give the final build a try sometime shortly.

Last seen: 5 minutes and 43 seconds ago

Posted on 2017-08-20 03:37:08 AMLink
I've taken a quick look at the build and it's really sad you won't get to finish it. Everything in it looks really awesome and polished and on that note, it's great to know that people are allowed to use these resources so that they don't go waste. As I said before, I've only taken a quick look but I'll be playing the entire hack later at some point.

Good luck with your life too!