Has anyone heard about Descent:Underground's Kickstarter?

Posted on 2015-04-04 04:36:18 PMLink
Hey, it has been a long time since the last time I visited SMW central, good to be here again. I was making a cool SMW mod but due to other projects it got suspended on indefinite hiatus.

But well, let's go to the main topic!

So, if there's anyone interested on games other than Mario, this may be interesting news, specially if there are some PC Old-School gamers around here.

You may have known the Descent game series from the 90s.
Well, there are exciting news, as I would like to let everyone here that there's a new Descent game in the making, w00t!!

Now, In case you don't know what Descent is, here's a video of it:
https://www.youtube.com/watch?v=P2L6x_BGFsU
And the article of wiki about it: http://en.wikipedia.org/wiki/Descent_%28video_game%29

There where 3 titles of the game, the last being Descent 3 from 1999:
https://www.youtube.com/watch?v=_dDpOSAa8R4

And since then, there has not been any REALLY good 6DOF (six degrees of freedom) game: http://en.wikipedia.org/wiki/Six_degrees_of_freedom

But now, a bunch of developers from Descendent Studios are trying to bring this game to this generation by making a new iteration of the franchise, titled Descent: Underground.
They started their Kickstarter campaign and there are still 6 days to go on it, but they still need more funding.

Here's a fan-made trailer that joins several excerpts from the developer's videos: https://www.youtube.com/watch?v=6b6nLXHNyP8&feature=youtu.be

So if you're a fan of the Descent series or you didn't knew about it but it appeared like an interesting concept, check out its Kickstarter campaign:
https://www.kickstarter.com/projects/descendentstudios/descent-underground/description

Let's make it happen! (At least that's what I wish for as I'm a BIG fan of the franchise).
So, what do you all think?

-
PS. (I'm in no way affiliated with Descendent Studios or the Descent: Underground project, I'm just a really big fan of Descent, and I would like to see their project to succeed. I also hope this is not considered Spam?)

- EDIT: If you want to play the old and original Shareware demo version of Descent, there's a post @Descendent Studios forums where you can download it

It may seems that there is no one here that is truly interested on this game, but if at any case you think it may be interesting but my post seemed boring (too much text) and you prefer visual stuff, check out some images of the early pre-alpha tech demo of Descent: Underground.

That may persuade you to back and support the project, lol 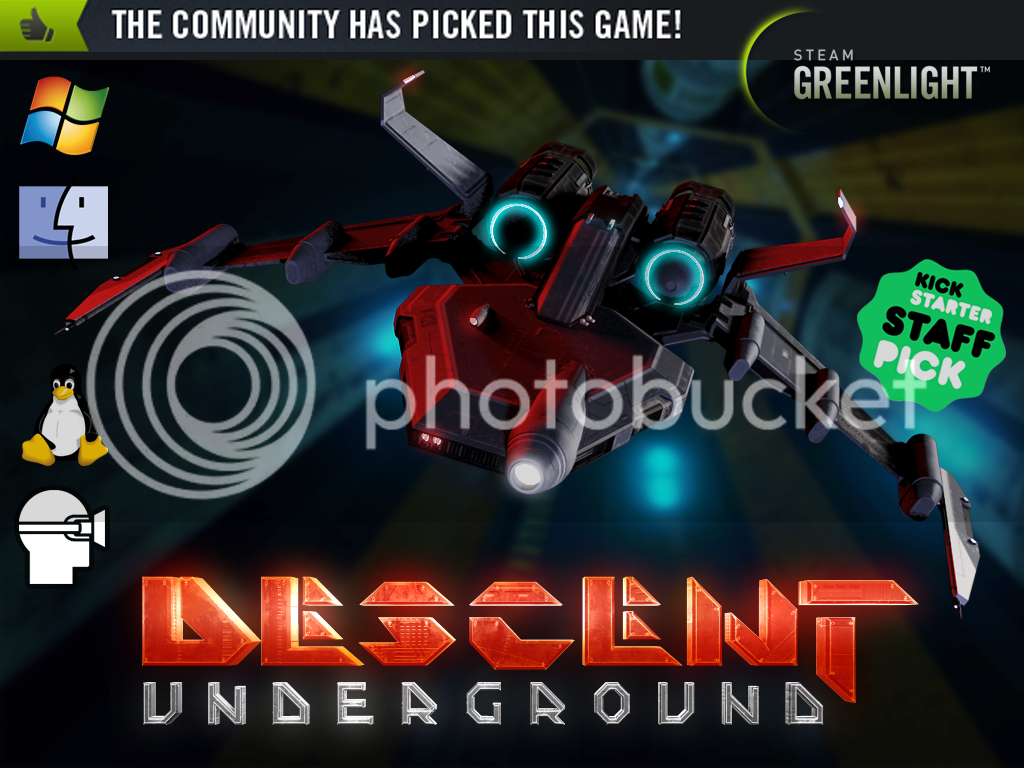 You can even win an AMD 295X video card if you participate through a Kickstarter referal contest!:
http://descendentstudios.com/community/topic/1221-win-an-amd-295x-video-card-referal-contest/

(NOTE: This is just in case someone is interested but skeptical or undecided during the final hours of the campaign, it's not my intention to make Spam.
However, if moderators feel this post is not correct, feel free to do whatever you may want to it).
My Website: