The last you'll hear of Pokey's Adventure (8.5 new levels inside!)

The timeline is basically this:

What I'm here for today is the January 2009 version, the third step on the timeline. This was before I revamped the visual style, and I got almost two worlds done (the farthest I've ever come). I thought this version was lost for good, but just recently I found it among the files I had rescued it from my old PC. It was quite the nostalgia blast for me - probably not as much for you, but oh well - and instead of letting the levels rot on my computer, I thought I'd let them see at least a bit of the light of day.

This 2009 version is what I'll be sharing with you today!
Note that it stops abruptly during World 2's castle, sending you to an infinite bonus game. Also keep in mind that the music's a tad screwed up - I must have played with Sample Tool at the time and messed up the steel drums. oh well~

Levels from 2008, to put things into perspective. Don't expect them to be masterpieces.

Last seen: 52 minutes and 51 seconds ago 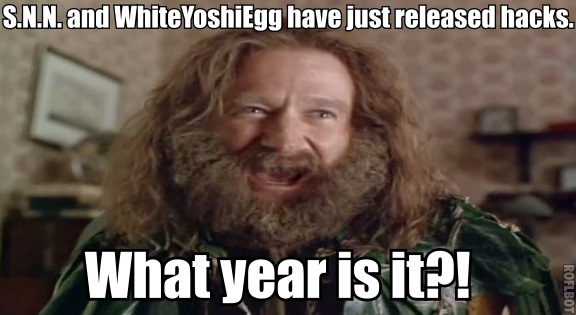 Anyway, I know the feel of not getting a hack done and just releasing what you have (hint @ last summer C3).
So yeah, sometimes it's better to just accept that things have hit a dead end and move on.

As for the hack itself, it's good. Pokex when holding things looks nightmare inducing but other than that... it's good :>Anime statistic on MyAnimeList:
400 animes completed ✓
6000 episodes completed ✓
100 Days completed ✓
... what even am I doing with my life?