Posted on 2015-08-10 12:34:44 AMLink
So, I made this thread because I was really bored, and I wanted to show off some art that I made. By the way, I took these pictures with my camera in my unsteady hands, so they may be a bit blurry: 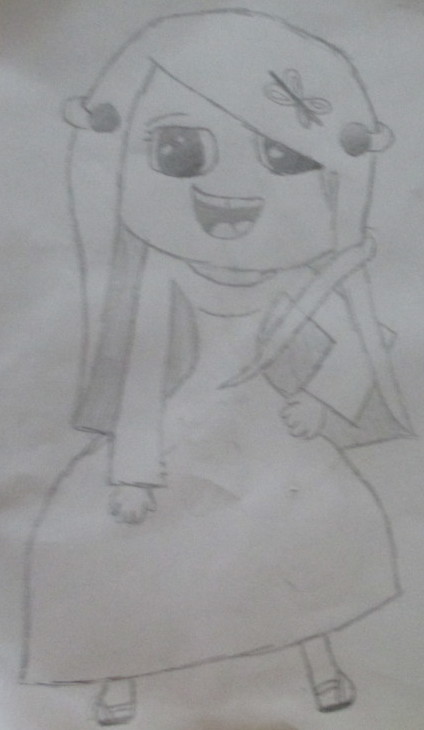 This is one of my best drawings, I gotta say, and also, usually I make square hands and feet instead of fingers and feet that stick out a little. The hands were a nightmare. The eyes were pretty hard, and pretty awesome. I think my favorite part is the eyes, then the butterfly hairpin, and then the dress. 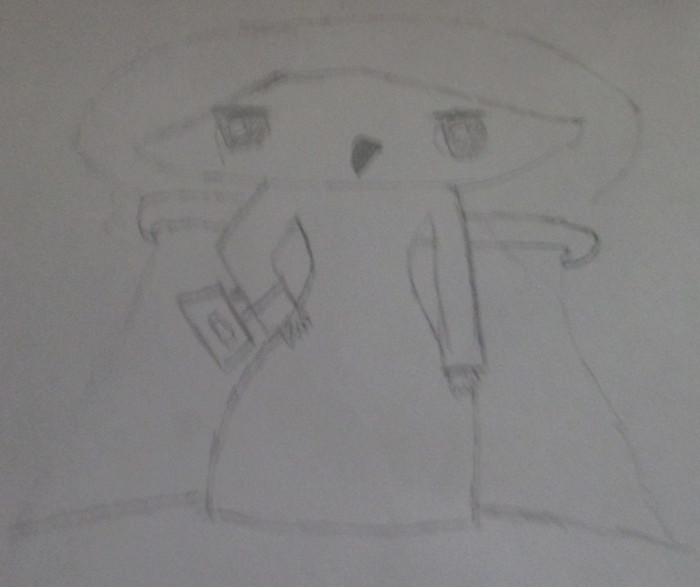 This is probably near one of my best drawings, and it didn't take long at all. It's also one of my most simple ones. I did this to test my awesomeness in making hair and annoyed looks, don't you think it's pretty good? Also, the thing in the middle of the head is NOT a beak, it's a mouth. 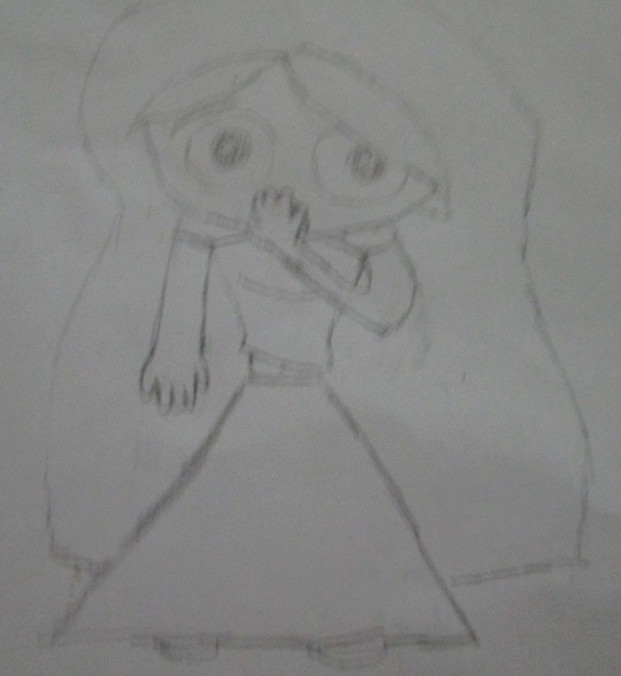 Didn't take me that long to make this, either. The surprised look is one of very, very few that I've made. It was quite hard to bend the arm into that position without making it look extremely unnatural. The bangs didn't take that long, and they're probably my favorite part about the picture.

If you have any comments, don't be afraid to post them! I made this thread to see how good my drawings were in other people's minds.
oh hey there
Last edited on 2015-09-03 06:06:34 PM by DimondKatie

The first drawing is a bit more detailed, it even have some shadows, so it's my favorite. The second uses proportions in a weird way (that giant head) but It is not so bad, actually. I mean, just look at this.

Posted on 2015-08-11 08:55:04 AMLink
Originally posted by Nox
I mean, just look at this.
This is a stylized drawing that still has the correct form. The head might have a weird shape but everything is still in the right place. Whoever drew Arnold was a skilled artist.

What this guy up here is showing is just a big mess.
Learn how to draw. It's in the rules.

Last seen: 6 years and 1 month ago

Posted on 2015-08-11 09:01:45 AMLink
Originally posted by Torchkas
What this guy up here is showing is just a big mess.
Learn how to draw. It's in the rules.
Well, that was blunt.
DimondHakz, I think your drawings are not bad but at the same time not perfect, the first one is superior to all of them but they could look a lot better with some more polishing and some more praticing. Keep drawing.

Posted on 2015-08-11 08:11:19 PMLink
Originally posted by Torchkas
What this guy up here is showing is just a big mess.
Learn how to draw. It's in the rules.
Hey sorry but I still don't understand what the hell you're aiming for when you shoot everyone down immediatly as if they had 0 potential. And no before you respond, linking him to a bunch of drawing sites is not helping either.
◆ LINKS ▶ Twitter | YouTube | SoundCloud | Fortaleza Reznor
to hear birds and see none.

I'm just a shot away from you. 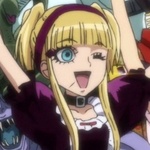 Posted on 2015-08-11 09:35:54 PMLink
This is NOT bad,in fact i like the first drawing.This guy can make better drawings if he keeps trying,i used to draw like this or worst a few years ago but i have improved,he can do the same. Posted on 2015-08-11 09:51:33 PMLink
With more reason you shouldn't be an ass lol. The way you said it made it look like he sucks and should feel bad. There's more than one way to say "you're not good" to a person you don't hate.
◆ LINKS ▶ Twitter | YouTube | SoundCloud | Fortaleza Reznor
to hear birds and see none.

Also, linking to how to draw stuff is actually helpful, mind you.

Posted on 2015-08-11 10:17:13 PMLink
Originally posted by Torchkas
Originally posted by Nox
I mean, just look at this.
This is a stylized drawing that still has the correct form. The head might have a weird shape but everything is still in the right place. Whoever drew Arnold was a skilled artist.

What this guy up here is showing is just a big mess.
Learn how to draw. It's in the rules.

but looks a bit offensive expecialy "Learn how to draw. It's in the rules." is very offencive

this tutorials could you help you

I'm getting pissed off because you're ridiculing the other artists who post here by posting effortless pencil drawings of hourglasses with heads attached to them. People then get mad because I called you out on it. I am not going to show off my art because I'm self-reflecting in a way that I'm not comfortable with comparing myself to the others who post here. This is unrelated to you, but I think you should try to do the same. Look at your stuff and think "what am I accomplishing by posting this?"

What you accomplished today was a wake-up-call from me.

learn
how
to
draw

you are very offencive

I'm just a shot away from you.

Nobody is perfect at drawing,im not and i think you're not perfect as well.Some people are better at drawing,some need to improve and some are just starting but all of them deserve the same respect.

That's all i will say,im not going to fight with someone that can't face the fact that some people are not good artists yet but they may improve and turn into great artists or at least they will be better.

Btw i think this discussion is a bit offtopic because the original purpose of this thread was to showcase some drawings,not to fight whenever he's a good artist or not.

Posted on 2015-08-11 11:23:24 PMLink
Torchkas I'm totally fine with comments where you actually say what is wrong with someone's work but you just said someone is bad at something without actually saying why.

Half the comments you make nowadays are better than the one you just made because you actually say that 'there's excessive dithering' or 'the shading is bad' but you just said 'learn to draw' without saying two thirds of the stuff posted here were bad five-minute doodles.

@op: I can clearly tell that you only spent like five minutes on the latter two drawings, possibly combined. The first one is much more detailed and visually appealing so clearly you spent a lot more time on it. I'm going to completely ignore the latter two because they do not showcase any sort of skill, and instead focus only on the first.

It's an okay drawing. The shading looks okay, but I cannot tell what sort of attitude your character is supposed to convey. Cockiness? Pretentiousness? Snarkiness? Happiness?? Indifference??? Calmness?! Your eyes also have extremely wide pupils which look unsettling and almost give off the impression that she's brainwashed.

The hands are way too small. She can barely rest one on her dress so how is she supposed to grab anything bigger than a tissue? Her feet are also similarly small to the point where you wonder how she doesn't trip over a pebble.

Speaking of the dress, it could use a lot of work. It completely lacks any sort of texture to indicate that her dress is what's five times the size of her head and not her hips. Gems lining the bottom, some folds around the whole thing, maybe a belt like in the third drawing would help to make her dress look less boring and plain.

On a completely unrelated note, what are those things wrapped around her head and hanging from her left shoulder? I can't even tell what they're supposed to be.

Don't be like me and just give up, because you've actually done better with this drawing than I ever did with anything more complex than a stickman. But please actually put as much effort into your future drawings as the first one in your OP as the latter two are obviously five-minute doodles and are much lower-quality than your first one you posted.


Quote
You don't need to be able to draw well to see what is good art and what isn't.
indeed
c3 winter 2021 | music stuff | youtube

Posted on 2015-08-12 12:28:48 AMLink
This thread highlights the number one problem of this forum (and several art communities on the internet really): nobody lets criticism happen. While it's true Torchkas could have elaborated more on his posts (which MP did rather well) I think what he says gets the basic message across: a lot of work needs to be done. And yet several users feel the need to white knight the artist (who has not responded and is probably really happy their thread devolved into this) as some form of art justice or something. Sites teaching how to draw can be useful, as they give users templates to work and evolve from. But while yes, people will improve with practice, they won't know where to improve if they're not given criticism of their work. The artist can't shut out criticism, and likewise people should not shut out criticism for the artist. If you can't accept that, then good luck getting any farther with your art than posting it on a tiny forum and getting 3 pity posts a year.

As for the pictures in question, they're fairly low quality, and the bottom two are bordering doodle territory. I'd argue the most glaring issue of all three is the consistency. All the head sizes, hair lengths, hand sizes, and dresses are all completely different, and for the latter I don't think they're really supposed to be different (at least for the first two). You need to be able to draw a character at almost the exact same proportions every time you draw her; you need to be able to control how your character looks. Once you got that down, then you can work on better detailing your character. Another piece of advice I would give is to create an identity and story for your character. If you're able to give a character a world and society that shaped her, then I feel you could better draw her; even a personality would help out.

On an unrelated note, "typos for repair" is my new favorite phrase.

Last seen: 6 years and 1 month ago

Posted on 2015-08-12 12:37:21 AMLink
Originally posted by Derpy Backslide
This thread highlights the number one problem of this forum (and several art communities on the internet really): nobody lets criticism happen.
How is bashing and spitefully in literal sense, calling someone's work garbage without a reason criticism?
Last edited on 2015-08-12 12:37:59 AM by MrGreenThunder

Originally posted by Mr. GreenThunder
How is bashing and spitefully in literal sense, calling someone's work garbage without a reason criticism?
where was the spite? the thing is, just about everything needs improvement. he really needs to take sometime and just learn the fundamentals of how to draw such as how to do proportions, perspective, shading, etcetera. those how to draw tutorials would really help him a lot. torchkas probably could have explained himself a little better but yeah. it's hard to give specific constructive criticism when the fundamentals aren't there.