Posted on 2020-03-04 11:03:22 AMLink
You should make the snowman’s body fall down or disintegrate in some way instead of just disappearing
allow shy guy emojis in post footers you cowards!

Posted on 2020-03-04 11:21:17 AMLink
If you do follow RZ's and VF's suggestion, then after being hit with configurable fireballs, the lower part reveals puffs of smoke, showing it melting. The same thing can be done for the head, but the nr. of fireballs needs to change here.

I ended up scrapping the head-dropping mechanic from the snowmen, because things quickly ended up crowded and it didn't turn out to be too fun to deal with. I did have them vulnerable to fireballs at the beginning, but that ended up making them too easy, so now they're fireproof.


I've left this thread alone for longer than I had planned, mostly because I had various other small stuff to do and it took me way too long to get back into the swing of things.

Since my last post here, I've actually finished world 4-1, and made some progress on the visuals of world 4-2! This is going to be a frozen lake kind of level - with the most ambitious background effect to date:

The ground stretches and shrinks depending on your vertical position, and splits into an above-ground section and an underwater section. I think it's come out pretty neat, though it's ridiculous how much work (and how many failed attempts) went into it. It's not even 100% done yet, it's just barely in a showable state.

The sad news is that this effect is so heavy on the resources that it needs SA-1 to actually not break or lag beyond belief. I am planning to port to SA-1, but only after the rest of the hack is done, so I can't actually use this effect in my hack yet. (the GIF is from a second ROM I set up just for that.) I'll see what to do about that.

Last seen: 56 minutes and 2 seconds ago

Posted on 2020-04-15 12:06:21 AMLink
It already looks extremely impressive! HDMA effects really put this above and beyond anything we've ever seen in smw hacking before. Hopefully this can work in places beyond just the surfaces of water; making this effect in that field of wheat might look really beautiful too, even if for obvious reasons you can't go underground to look at it from below.

What's left to do with it to put it towards 100% completion?

Posted on 2020-04-15 06:25:17 AMLink
Let's be honest: Such type of parallax scroll is really tasking (especially since you have to use PPU multiplication) and it's only natural that you ended up using SA-1.

You already made previous on Discord and now, here we are: A parallax scroll which doesn't just scroll the back parts slower horizontally but also vertically. The fact that there is a separate gradient for the water makes the illusion of going into water even better. I do wonder whether it should be possible to modify the trees scrolling so they're slowly moving to the top when the camera moves down. Then again, the effect is already good enough on its own, no need to use any additional effects.

Posted on 2020-04-15 11:44:23 AMLink
That's beautiful and kind of mesmerizing to watch. Your ability to create lovely backgrounds is extremely impressive.
GANYMEDE

That said with what you've just shown in that Icy Lake level...
It's really impressive as always. Can't wait to see more.


Originally posted by Deeke
Hopefully this can work in places beyond just the surfaces of water; making this effect in that field of wheat might look really beautiful too, even if for obvious reasons you can't go underground to look at it from below.
nooo don't tempt me!

I made that effect more or less to be able to say it's there and I did it. Given how much time and energy went into it, I really can't afford to go back and rework existing backgrounds. (Though I agree it'd look really cool!)


Originally posted by Deeke
What's left to do with it to put it towards 100% completion? 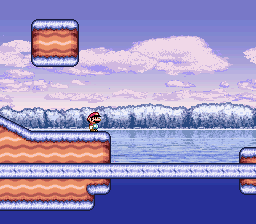 I gave the reflection of the trees some transparent lines inbetween and added clouds. I originally wanted the clouds to scroll and the reflection to wiggle a bit, but that feels too costly at this point and I'm legitimately feeling bad for the CPU.
(and by the way, the ice surface tiles are placeholders for now)

I've been talking to Von Fahrenheit, who's been working on his own parallax effect for Extra Mario World which looks amazing! His method is very different from mine but we've exchanged some ideas (today I figured out how useful double buffering is!), and we managed to optimize my own code quite a bit - now it runs without glitches on a non-SA-1 ROM, which means I can stick with my plan to port to SA-1 only at the very end. (Though I'll be disabling the effect while working on the level design because it still lags like crazy.)

I learned so much along the way! This background really feels done now, and any extra time poured into it would be to no one's benefit. Time to actually, you know, come up with a level to build. 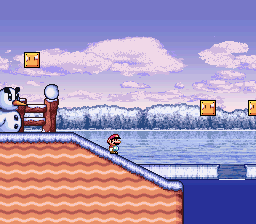 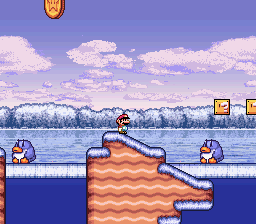 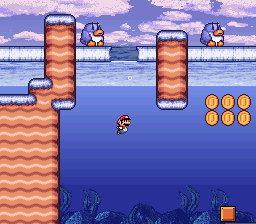 Featuring new ice graphics, and focusing on these Bumpty-like Penguin enemies. All they really do is slide and bounce, like so:

As always, the level is turning out very different from what I initially had in mind (and I'm not using nearly as many underwater sections as I thought I could), but hey, it's progress.

Once I have the design planned out, building it is usually relatively quick. 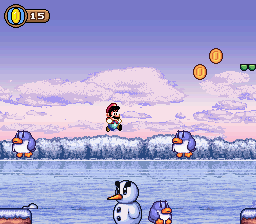 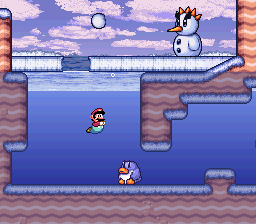 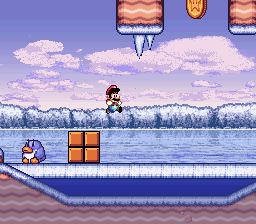 The setups here didn't work out as great as I had imagined, but overall I think it's an alright level, especially when you count the parallax effect.

On to 4-3, which will hopefully have fewer high-effort visual shenanigans.

Posted on 2020-04-27 07:06:00 PMLink
Wow, that ice/water effect really looks well done. Reminds me of the water effect in Hydrocity Zone Act 1 and Launch Base Zone act 2 from Sonic 3. Makes me wonder what other graphical surprises you have in store for us.

I've since started working on 4-3, for which the visuals are pretty much done.

(and yeah, they were substantially easier to put together than those of 4-2 - as far as HDMA goes, this is back to the standard stuff.)

I finished implementing the level gimmick, which for some reason is circular layer 2 movement. After a lot of fiddling and a bit of help from Medic, this is working more or less glitch-free!

I also reworked the layer 3 background because the old one was feeling way more like a cave than an ocean, and I wanted to go for an "iceberg pieces floating underwater" kind of vibe. I would have called the old one good enough, but for some reason it was really rubbing me the wrong way! This new one's a whole lot closer to the vision in my head, and I love when that happens.

You made a really nice background, as always, this time one that would give the Titanic PTSD, but I find it odd that you say it works glitch-free and still don’t touch the moving ice blocks a single time in the gif. I’m gonna be honest that kinda blue-balls me a bit :o
allow shy guy emojis in post footers you cowards!

Posted on 2020-05-06 09:41:34 AMLink
Originally posted by Von Fahrenheit
I find it odd that you say it works glitch-free and still don’t touch the moving ice blocks a single time in the gif. I’m gonna be honest that kinda blue-balls me a bit :o
Alright then, have a demo! (14MB GIF)

The only oddities I found are that you sometimes clip through slopes (not a big deal and maybe I won't use slopes then) and if you stand on layer 2 you move relative to it by 1 pixel each revolution (not noticeable unless you stand completely still and fast-forward for 20 seconds).

Posted on 2020-05-06 11:01:57 AMLink
Actually, no! Not before I made this, anyway. I haven't followed the Kaizo contest, so I like to think I came up with the idea on my own. I did find out about it later though and exchanged advice with Medic.

Posted on 2020-05-06 03:16:12 PMLink
All right, that's what I wanna see! Slopes seem to be kinda weird in SMW in general, so it's not very surprising that they would be inconsistent here... Well, anyway, this looks really nice. Might wanna consider a slightly different palette for the layer 2 to increase variety, but even like this it looks quite good.
allow shy guy emojis in post footers you cowards!

Posted on 2020-05-07 01:38:21 PMLink
Dang, I'd never even thought of making Layer 2 move in a circle before. I think it would look better if the moving parts were made out of solid ice instead of the same terrain as the main foreground, but still, nice.