Posted on 2015-11-30 09:44:26 PMLink
Originally posted by PercentN
I'm curious about your backgrounds though. How many ExGFX files do you use for them? I see so many unique tiles, how do you fit them all?
The backgrounds tend to take up two or three ExGFX files. (I draw them in paint.net and rip them with edit's BG ripper, and it often takes several attempts to get the number of tiles low enough - a frequent trick of mine is to just make it one screen high and disable vertical BG scrolling.) Usually there's enough space left for foreground and decorations, with just a few tiles' worth of leeway.


Originally posted by imamelia
And I thought you were quitting SMW hacking. I hope this hack actually comes to fruition, because it does look like something I would play (unless you end up making it stupid hard like most). I look forward to seeing future development on it. I'd also be willing to help out with the music.
Not leaving without a grand finale! :p This is something I'd really like to pull through. (And don't worry, I try not to make it too hard.)
Also, thanks for the music offer - I may get back to you on that when I feel it's time. (I've composed a handful of melodies and will probably need help fleshing them out and porting them, as well as making new songs altogether.)

Posted on 2015-12-01 10:34:23 PMLink
I struggle to believe it myself, but... I got the better part of a level done today! The layout is just about finished; all that's left now is decorations and resolving some technical difficulties. Feels pretty nice.1 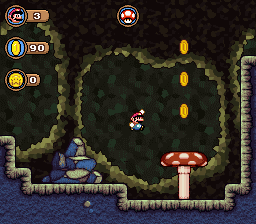 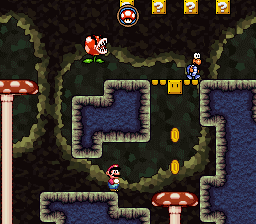 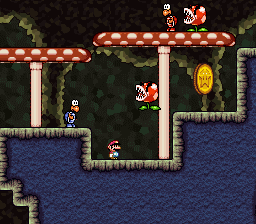 1except I probably should have started preparing for an important paper by now, but ehehe~

Anyway, that first screen could use some more enemies, but other than that, they're great

Close, but not quite as advanced - they're simply bounce blocks. Thanks though!

...and after quickly throwing together a bunch of decorations, level five is now officially done.

Have a couple of screenshots of the post-midway part: 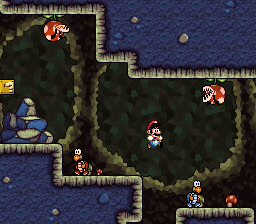 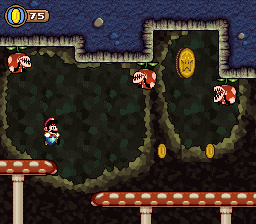 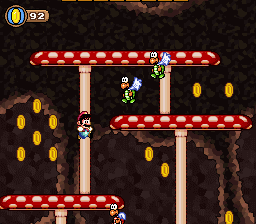 On a less productive-sounding note... unfortunately, after just this ~1 week of getting things done, this hack will probably already have to go on a hiatus again. Likely until around February, due to important college stuffâ„¢.

Posted on 2015-12-06 10:50:15 AMLink
Originally posted by WhiteYoshiEgg
Nothing special really - some stand around, some jump up and down.
Do any of them spit out fireballs... and do anyone of them jump while spitting out fireballs? And do the bouncy mushrooms affect enemies?
Please, SomeGuy712x...
PLEASE!!!!!!!!!
List of my SMWC ranks
My hack:

I finished my thesis back in February, and it's basically taken me until today to get back to working on my hack. I intend to pick up pace now (though I'll really only be able to hack on weekends). yay~ 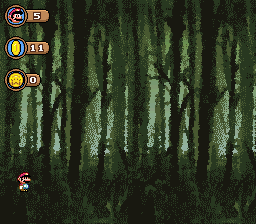 Have I shown this before? I think I have in the Screenshots thread? This is a layer 3 forest background (+hdma) I made a couple of months ago that's detailed enough to replace layer 2 in a pinch. (This is just a substitute for actual stuff to show, since I haven't started building the level yet.) It's ghost house time now, and I think this'll be a good fit for the outside part.

Last seen: 15 minutes and 35 seconds ago

Posted on 2016-05-13 05:13:49 PMLink
Pretty much competes some of Donkey Kong Country's (in general, not the first one) layer 3 backgrounds backgrounds. Awesome work, WHY WYE! Although it looks IMO a bit weird but considering that only three colours per tile plus transparency is pretty limited it doesn't matter that much.
Wow, was that a long time I gave someone feedback. <_<

In other news, ghost house tilesets are surprisingly challenging to draw, so have some Boos instead. 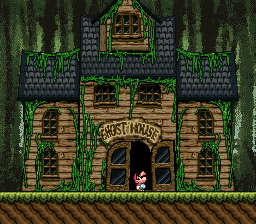 This is what I spent today making. Could've been a lot worse, I do think!
(I drew it in paint.net, but fortunately, getting it into LM was a breeze.

This is probably the most unimportant part though. Time for the actual, you know, indoors tileset.

Hmmm, just as a side note, maybe you could redraw the glasses from the right window, its shadow is X-flipped when compared to the others. But that doesn't affect the beauty of your tileset : >

Keep up the good work, you are really talented with hacking!

imo i'd remove the glass lighting if theres no more room for gfxI do art commissions cheap! PM here or DM via Discord for more details.

This is what I spent today making. Could've been a lot worse, I do think!

This is what I spent today making. Could've been a lot worse, I do think!
(I drew it in paint.net, but fortunately, getting it into LM was a breeze.

This is probably the most unimportant part though. Time for the actual, you know, indoors tileset.
Alright, this is absolutely beautiful, WYE. One, you're extremely talented in the artistic department, a lot more than I am, at least.

The detail of the Ghost House is extremely abundant. Just a side-note: some of the windows are X flipped, making the shadow kind of go the wrong way, but it's nothing important you need to worry about- the shadow is small enough to the point where most people would overlook it. Alright, next picture.

Originally posted by WhiteYoshiEgg
Thanks!

In other news, ghost house tilesets are surprisingly challenging to draw, so have some Boos instead.

Alright, this is beautiful, too. The Boos look awesome- and adorable. The foreground is beautiful and the background is really cool. However, some of the background looks kind of fuzzy and you ought to maybe tweak it a little bit. Or it's just possibly me. Anyhow, your Boos like I said were really well drawn. They look a lot better than SMW's, anyway. They're spectacular. The grass and dirt looks really nice. It's repetitive, but at least it looks good. The terrain is fine. The wooden platform that Mario's standing on, however, is a little weird. The palettes are nice but the wooden post the platform sits on is kind of weird. There's a shadow on each 16x16 tile of the post, unless I'm wrong and that was intentional. Well, I think I covered the art.

So, your hacking and ASM skill is great, too. I'm seeing a lot of really cool mechanics that I really feel that I absolutely suck at and need help with. First of all, I don't know any ASM. At all. Secondly, my levels feel... bland and short. Or it's just me hating myself, but other than that, I really think this hack has great potential. It's done swell so far and I believe you have the power and skill to keep that ongoing.

Nice job with everything, White Yoshi Egg. This hack is going to be great- the four season mechanic is awesome, the custom blocks and sprites- everything. I think you've outdone yourself by far this time. Keep up the good work.