Posted on 2016-06-05 09:51:18 AMLink
This is a big step ahead from your previous works. Sadly, this has too many flaws, in so many aspects, that I had to reject it.
I'm hopefully going to be as detailed as possible: you're used to complain about how mods don't explain reasons of removal very well, so I'll be doing my best here.

First aspect this hack is rejected for is about your design. There are lots of common flaws you do in your levels; I'm giving you examples: 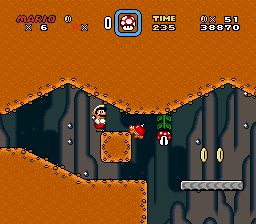 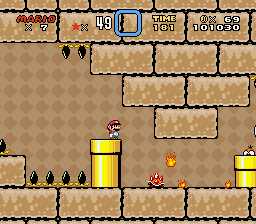 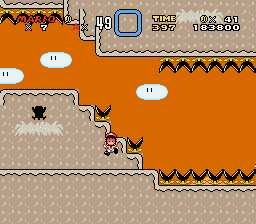 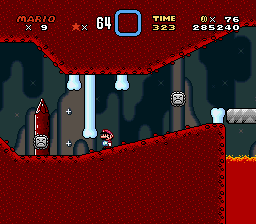 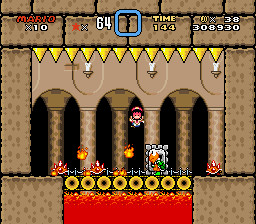 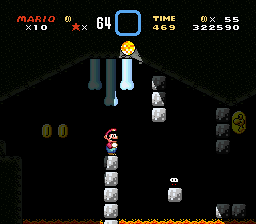 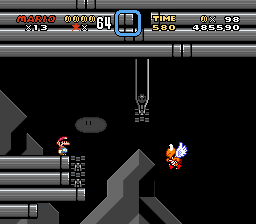 These are both examples of claustrophobic levels and unfair difficulty.

The former problem is generally caused by very tiny spaces to move in, and generally, very low ceilings and/or obstacles that limit your way of jumping. Take a look at the 6th screen, for example: in order to pass that section, you have to make a pretty complex duck jump, so that you can avoid the cement blocks up there + timing with the ninji placed there + landing on a 16x16 tile. It's obviously not a good section; not to mention, I had to abuse savestates myself, since some parts were so frustrating that going trough the whole level everytime just made things even worse.
Another good example of claustrophobic section is the 2nd screen: while it's still a possible section, you made player's life way too complicated with that low ceiling, making spinies very complicated to avoid in conjunction with that hopping flame, which I think it's the worst enemy you could've placed there: said sprite, infact, leaves small flames from where it jumps, and these aren't spin-jumpable. If you made the ceiling way more up, everything would've been way more fair and flawless. Remember, make sure you give enough room for Mario to jump; limiting his jump height in weird patterns is the worst thing you can make, because it's unfair and requires savestates abuse.
Last and good example of claustrophobic level is the last screen. The ceiling is more or less reasonable now, but that bullet bill cannon is on my way, and I have very little time to jump on the red koopa before it goes too high. Don't forget that this level also has a medium autoscroll generator; you have litterally one chance to jump on the koopa, but everything happens so fast that it's almost impossible to do it. All this, because of that bullet bill cannon you placed right in the path of a normal jump.

As for the unfair difficulty, well, this generally goes together with claustrophobic sections, but I took other pics so that I can (hopefully) make a good difference between both.
Take a look on screen 5, that thwomp boss. That's a good example of unfair section: you have a very little room to beat the boss (claustrophobic factor), the spinies and hopping flames he generates can't be killed if you don't have a cape, making all the sprites accumulate as the time passes, generating big slowdown and a very hard time to avoid everything that has spawned, plus the boss itself (unfair difficulty factors). Results? Me raging at it for a good 15 minutes of continues retries and state loads.
Another good example of unfairness is screen 3: look where Mario died. That's a stairs of precise jumps, that is, you have to land with exact perfection on the 16x16 tiles which don't have a muncher on it. Not to mention, touching one on its sides also makes you die, so I'm limited in a weird jumping pattern once again. The main thing, though, is the difficulty of this section. It's so impossible to pass with small Mario that I think this is actually a kind of section used in kaizo hacks. Your hack seemed a mix of kaizo and normal all the time; make sure to decide where you want to move with the difficulty style, aka if you want to make a normal hack or a kaizo hack.

Notice how I didn't talk about screen 1 and screen 4 yet. I'm doing it now. These screens are both examples of big Mario discrimination. This happens when you can easily pass only when you're small. You do this a lot in the hack. This can be avoided by doing a good testing of your levels, in particular, making sure that you can clear them flawlessly in all Mario's forms (mainly, small Mario and big Mario; fire Mario and cape Mario can be bypassed, since they just make everything easier in most cases, except when they're used for a gimmick, like ice blocks and so on).

Whew, that was about the design. I hope I made it everything clear. To sum it up:
- Don't limit Mario's jump in weird patterns, such as duck jumping and/or adding blocks on the way;
- Make your section reasonable in difficulty; don't spawn munchers and enemies in very tight rooms.

Another big aspect to talk about here: the aesthetics.
As I said before, I give you my congrats for improving so much in making your hack more visually decent. Yet, there is still room for big improvements. For example: 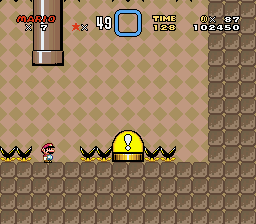 The cement blocks in this room don't look very good. They're the only bad thing in the screen, since the pipe is okay, the BG is too, and the switch and the munchers do as well.
When stuff looks like this, I always suggest to refer to SMW's standard palettes: that way, you can understand how the block visually changes when you change one color at time. Try it out!
Another example of bad palette, this time, a more massive one: 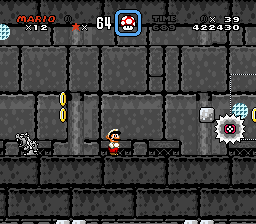 Look how the BG looks confusing. This, together with the FG's palette, which is okay if you remove the BG, makes everything look confusing to the player. Again, always refer to how SMW handles palettes, so that you can figure out how BG colors works here.

Another aesthetic problem you hack suffers is cutoff. A cutoff is when, litterally, graphic elements looks "cutted", for example, when the pattern ends in weird ways, or when it creates "holes". An example is below:

See the ledge in the ground? It's generating cutoff, and you can see the BG from the hole. This kind of cutoff is very frequent troughout your hack. Give it a playtrough, and see how many "cutted parts" you can find.
Sometimes it is hard to see, but it's there. An example is this one: 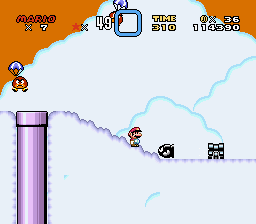 Look below Mario. Yes, the blue curve is from the BG. If you check in LM, you left a big hole in there, and it's very bad to see in-game.

That's it about the aesthetics. In short, these are my suggestions:
- Experiment with SMW's standard palettes before making your owns from scratch. Once you get how the BG, the blocks, and in general, the tiles you want to color, work, then you can go ahead and do fancy palettes.
- Make sure to not have parts of the BG/FG that "cutoff", aka parts that don't terminate their gfx patterns correctly, or parts that generally result in creating holes from where you can see the BG.

Last but not least, technical problems, also known as general bugs, problems related to technical aspects of the hack. I'm going to show you lots of examples. 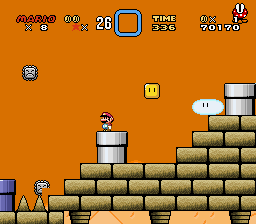 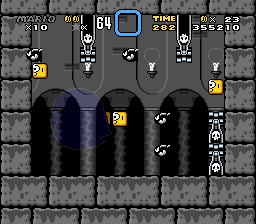 Examples of sprite tile limits issues. This problem is related to either the amount of sprites you have in one screen, or the sprite header settings (which can be seen with

in Lunar Magic).
The first screen has a cutoffed thwimp: look how it's missing an 8x8 tile in the bottom right.
The second screen is, instead, a more massive situation of the same problem: there are so many tiles showing that Mario became invisible!
How to fix this problem then? Well, you have three paths:
- Check your sprite header. Different sprites can use different headers (for example, if there's a banzai bill in your level, then you'll have to use sprite header 4);
- Remove a few sprites in that screen;
- Apply this patch and set sprite header to 10 in all your levels.

Another common technical error is FG tiles actlike. When you select a tile in the 16x16 tile map editor ( 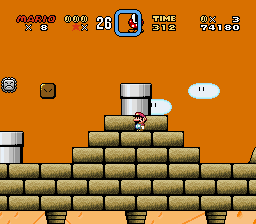 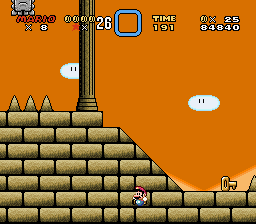 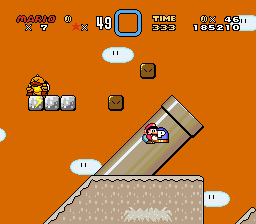 In all three screens, the FG looks solid, but as you can see, I can go trough it. Be sure to check the actlikes of your tiles. You can spot weirdness easily if you do a good testing of your levels.

- Don't put a coin over a question block. If you hit the block first, you'll also collect the coin above it, and you'll create an invisible solid block. I'm standing on it, as you can see.
- Sumo bros flames glitch everything here. Luckily, a patch can fix it.
- Your OW paths here disalign Mario's position. Make sure to not do weird paths, or Mario can get stuck forever in the OW.
- Another case of "can make you stuck forever". If you kill this boss under the pipe, he'll get stuck here when he tries to fly over the screen, resulting in a room where you're forced to die, since you can't get out of here alive.
- The midway point isn't working in the following levels:
()Calidus Sierra
()Temple of LostSouls
()Spiritsand Chateau
()Bleak Mortem Castle
()Badlands
()Blacksand Acropolis
()Deathnox Armada

That's all so far! I suggest you to read all the post, making sure you'll fix all the issues pointed in it. We also previously suggested you to get lots of testers before submitting anything. Make sure you get sone this time, since it felt like not even you, the creator, tested the whole hack.

Posted on 2016-06-12 02:20:13 AMLink
Starting off first and foremost GET A BETA TESTER!
We as the staff are not kidding we are not beta testers and from here on out we will remove your hacks on site unless there's proof that you've gotten a beta tester.

The second biggest thing that just gets flat out annoying, stop using old English on your hacks, it may seem fun but I didn't even bother reading any of the boxes cause I couldn't be arsed to take the time to mentally translate them.

You have a lot sprite limitation issues that plague your hack that should of been caught even in personal testing.

There's a few spots that have blind jumps and should have some indication where to land.

Most of the difficulty of your hack rely on either cramped areas or sprite spam.

The other part of the difficulty are ridiculous jumps.

And hidden moles throughout the game.

This part is a little annoying since you have to throw your item and catch it while spin jumping to proceed.

This jump requires you to spin jump on the thwimp to proceed.

There's a lot of cutoff and bad tile interactions.

You have to blarg jump to get this midway point which just is a poor design.

Your switch palace has a bad sprite sheet causing the end message to be messed up along with Mario being inside the message block same with the disco ball.

I barely found this spot and had to look it up in lunar magic to figure out how to beat this castle.

I could find noway around taking a hit right here, forcing a hit isn't a good design either.

See how Mario is off the level tile? You have bad paths right here and this should be fixed even if the game is playable.

Which he can get stuck in the wall as well if you stand too close to it.

Now I will repeat what I said at the begging, we will remove all your hacks on site unless you can prove that you've gotten beta testers.

I suggest making a thread in the WIP forums and don't talk in old English to actually get people to reply to it.