Posted on 2016-12-05 05:17:23 PMLink
This hack was created by S.N.N, but his version had 4 levels missing and was buggy. Then Zeldara fixed the majority of bugs but one level was still incomplete.

I finished that level (Extra 5). Now the second ever full YI hack is complete!

5-4 and 6-2 are reported to have bugs, but I am unaware of the nature of these bugs.

If anyone finds a bug, please let me know.

Special thanks to Trix, who helped me and provided me with a list of bugs, as well as Raidenthequick and Doggycharly plz for the feedback. And, of course, S.N.N., Zeldara, and Nintendo for making this possible.
Last edited on 2021-01-05 09:30:08 PM by Tahixham

Posted on 2016-12-06 04:26:36 PMLink
It's nice to see this hack finished after so many years of work. I was always waiting for all of the levels to be finished, and now I can finally play it! Good job to everyone involved in completing this.

Hate to say this but these new areas in extra 5 are, to be honest, terribly designed, as these sections just abuses too much of sprites, cheap design and enemy placement, uneven difficult and just simply bad level design. Not to mention they don't reflect the "Kamek's Revenge" level design style, and again, these areas just spam a bunch of sprites and call it "good" level design. The "30th area" being possibly the worst part of the level,
and why after the 40th area you start directly in mid-air just to fall to a spike floor? Do you think that is the best way to make a level difficulty? especially since in every area you are being ambushed by 9348975 enemies RIGHT WHERE YOU START?? just no 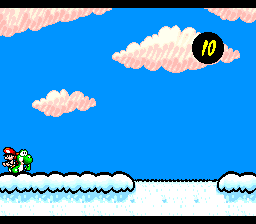 No screenshot but DO NOT use two thunder lakitus!!! using these two sprites together causes mayor slowdowns and other sprites tend to vanish!!!


Yet more slowdowns + vanishing sprites, not to mention this design is just terrible and cheap, just like every other "new" room. Also, I gave up at this point. 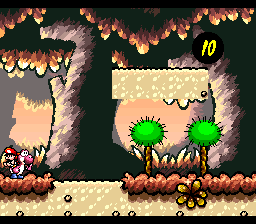 May I suggest to start Extra-5 from scratch again? please...

Item memory error: The flower is placed below a coin 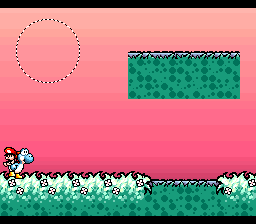 
Originally posted by BTD6_maker
5-8 and 5-E: In certain rooms the screen goes a strange color rather than black after death.
Do not use gradients in levels that use those polygonal rotating objects, use a solid background color instead.(preferably, a solid black background)
Last edited on 2016-12-15 07:41:15 PM by Doggycharly

Posted on 2016-12-08 07:32:49 PMLink
My main concern was that the 40s were perhaps a bit too hard even for KR. The 30s were, in my opinion, difficult, but not excessively so (though the flashing egg in 32 was very tough to get). By the way, you may have missed a red coin in 38 (which I thought was a bit too well hidden, though many other red coins in the hack are very hard to find).

For the three trials you described (37, 38, and 44) I didn't notice any vanishing sprites or slowdown. (Apart from 38, where the only vanishing sprites were that the fire occasionally disappeared and reappeared rather than being continuous. Since you are dealing with two Thunder Lakitus rather than one, I thought this made it more fair). What emulator do you use? (I use ZSNES, but disable the new graphics engine).

I was concerned a bit about some of the 40s starting right above spikes (particularly 47), though I myself could beat all of them. Perhaps I should add platforms to make it safer. My aim was to make this harder to complete than Factorius Mecanus was to 100% but not to the point where it is almost a Light Kaizo. In some previous trials it is possible to come under attack right when you enter, though that is not as bad as there are plenty of stars. I will try to fix the most unfair cases of these, though.

I found myself running out of ideas for difficult trials, mostly because I found myself heavily restricted in which sprites I could use, and that may have led to the large number of enemies.

I don't want to redo this level or even many of the trials but what I will do to make it slightly fairer by adding platforms so you do not die immediately upon entering the level if you do not flutter-jump. Also, on 44, I willuse yellow rather than red platforms.

Overall, I mainly just wanted to finish this level to complete KR, but I will try to reduce the unfairness. Thanks for the feedback.
Last edited on 2016-12-08 08:17:57 PM by BTD6_maker

I left the "slowdown" rooms as when I played them to test for it there was no slowdown or vanishing sprites. I will need more detail.

I nerfed 5-E considerably, particularly in the 40s. There are now platforms beneath you in every level in the 40s. I also removed a few sprites and edited things slightly, such as removing the hidden coin in 38 with no hints on how to get it and moving the egg block in 32 to make it easier.