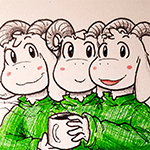 Posted on 2017-02-04 11:51:53 AMLink
“One of the most poetic facts I know about the universe is that essentially every atom in your body
was once inside a star that exploded. Moreover, the atoms in your left hand probably
came from a different star than did those in your right. We are all, literally, star children, and
our bodies made of stardust.”

It's been 4 years since I've touched anything SMW related, but I was secretely entertaining the idea in my mind to finally participate to a VLDC after all these years.

So I've dragged Lemonade into participating alongside me (he was actually the one pitching the original theme of the level anyways, my original entry would have been based on pumpkins).

We started working on it probably 1 week before the rules were even announced (and boy that one map16 rule hurt me hard, I spent 3 hours cutting fat and making it so everything would fit in one page ay).

But yeah, so far that's all we've got.

Posted on 2017-02-04 12:00:48 PMLink
The aesthetics look really promising and i think the level will be designed quite well, too. Depending on how interesting your Design-Gimmicks are this could be a high-class level.

Loved lemonade's work back in the day, happy to see he's on board as well.

Userbar made by Green Jerry

Posted on 2017-02-04 02:09:48 PMLink
Looks like a cross between Interplanetary from VLDC9 and Lightvayne's cloud castle level from VLDC8. Really pretty - hopefully the gameplay will be fun enough to match the aesthetics.

Posted on 2017-02-04 02:21:29 PMLink
Thanks guys, I hope you'll have as much fun playing it as I had fun remapping the entirety of the first half making the atmosphere :p

Last seen: 32 minutes and 15 seconds ago

Aesthetics on point for the outdoor area, in contrast with the indoors, which (IMO) is looking very weird, atmosphere-wise.

Posted on 2017-02-05 09:19:35 PMLink
Originally posted by Spy
Thanks guys, I hope you'll have as much fun playing it as I had fun remapping the entirety of the first half making the atmosphere :p

Can confirm.
While Spy's handling everything aesthetics (and oh boy is he good at it), I'll be making sure the level underneath is solid enough.
Let's just say I'm done redesigning all of my half. Map16 hell exists, I've been there.

Thanks for all the kind words! We'll keep this thread updated. New screenshot SOON.

Last seen: 20 minutes and 24 seconds ago

Posted on 2017-02-05 09:28:17 PMLink
This looks one hell of a good level. The starlit sky is beautiful and while we haven't seen much of the level for the time being, I'm sure it will be excellent.

In that case, why not use a (maybe graphically revamped) layer 3 smasher, with anvil-shaped platforms underneath, since it's a forge ?

Posted on 2017-03-25 02:38:40 PMLink
Yeah this thing isn't being worked on anymore, we both felt like we prioritized aesthetics over design, and overall, we weren't happy with the results at all.

Anyways, I'm working solo on a different kind of level, and I only have 2 days left, so let's go :

What I have done so far (Up to the Midpoint anyways) (.bps)

Screnshots (don't really spell out gameplay too much though) : 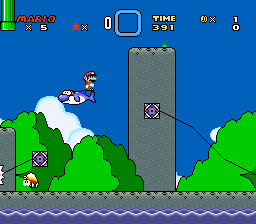 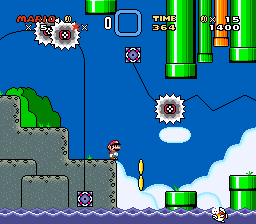 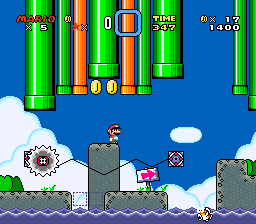 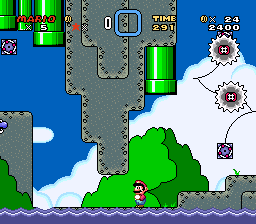 .gif of the entire firt half :

Posted on 2017-03-25 03:57:36 PMLink
Originally posted by Spy
Yeah this thing isn't being worked on anymore, we both felt like we prioritized aesthetics over design, and overall, we weren't happy with the results at all.
Sad to see you part ways with your project, I was legitimately looking forward to play it. But yea, sometimes it's difficult to balance the aesthetes/design (i myself am bad at both) so I don't blame you guys at all.

About your current project, I didn't play it yet since you embed a gif of what you have so far so I'll just hold on until you have it finished. I can't tell much from that gif, but it looks very short and straightforward. I didn't see any threats as per enemies/obstacles at all, it looks all wayyy to easy to avoid. It feels like the only way to get hurt is if you want to do so. The closest to danger is the Yoshi Coin room, which is also very easy to avoid. Also, no question blocks for the entire first half? Not sure if it's a bad thing or whatever but, yea. Also I feel like the line-guided sprites are being way too overused in this year's vldc. But that might just be me, as I didn't see anyone else complain about it yet.

You keeping the original graphics for this level? I mean after what I've seen from your previous level you do have some fancy tricks to play with for the aesthetics. But as for me, I do really appreciate fully vanilla levels, so whichever you go for I'll probably be satisfied with.

Yes, I'm not even changing the palette, I don't want to waste the little time I have left to something that won't impact the score as much.

Also, I don't know about the difficulty, I've played through every element 20 times so I'm used to avoid them by then, so maybe the .gif makes it seem easier than not.

Thanks for you input though

Posted on 2017-03-25 11:40:38 PMLink
I had a lot of fun with that! I cant wait to play the finished version, what you have is awesome!!! I dont think it's too easy, there are clearly threats all around you, and getting through them without getting hit feels good. 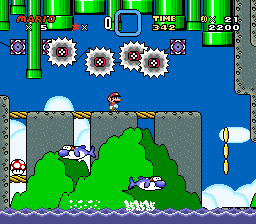 This is the only obstacle which has some threat potential, however it can be completely avoided if you are Small Mario. You can just walk over it, the dolphins can lift you from whichever angle they want and you'll not get hurt, no matter how many cycles they do. 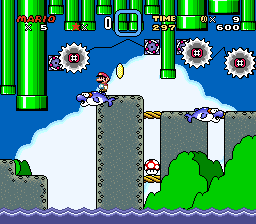 And to get there you can also avoid taking a hit if you just walk off the dolphin. You'll never take a hit if you're Small Mario. 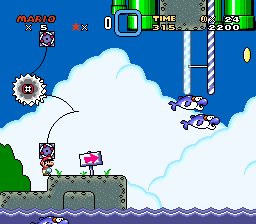 Very little (to none) threat potential. You can't see in the screenshot due to the Snes9x screenshot delay, but I meant to take the SS when the grinder is at it's max range (top>bottom), and it will not hurt if you're small. 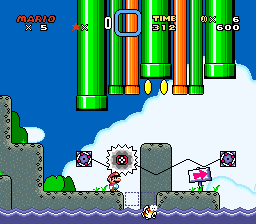 This one's not threatening too. Not only is the line guide very large, it also goes zig zag which makes the travel time bigger. You can see it coming from afar, so it's not like you'll get caught unaware. If you take a hit, you totally messed up or intended to. Also, this time you can see in the screenshot that even if you stand below it you'll not take a hit ever, as Small Mario. 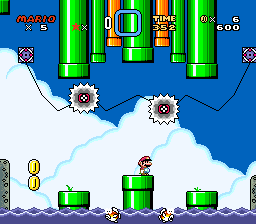 I uploaded this one by mistake, but I guess the ss speaks for itself. Only way to get hurt is if you want to.

You could argue that the first Yoshi Coin is a threat, but it's optional, so...

So yea, I think it's lacking on that aspect. Unless you drop a brick in your Jump key whenever you need to jump, you can pass through everything with ease.

Made it so you have to take timing into account

Lowered that by 1 Tile

Lowered that by 1 Tile as well

Added a timing element as well

Those vertical dolphins can kill small mario, not like the horizontal ones

Lowered the end point by 1 Tile and made it faster

As for the second half, I'm thinking about a layer 2 rise gimmick with grinders.