Gotta have to change that GitHub repo name eventually...
Anyway, here it is, my new sprite tool. I did release a bit of a "preview" during C3 but this is a slightly more refined version.
I also spent the past week+ on converting some of the original sprite tool sprites for asar + sa-1 support. No need to thank me.
(That said, the sideway thwomps are a bit weird with their graphics appearing cut off. No idea why that happens, so if anybody figures that out, tell me :3)

So yeah, this is one thing that's probably gonna be a problem for many people. The tool only allows asar coded sprites... no more TRASM. That is again for 2 simple reasons. 1. TRASM sucks and 2. I'd have had to literally overthrow the way my entire code works to include this shitty assembler, so no thank you. The tool basically works the same as sprite tool and can be applied on top of a ROM that used sprite tool before. It will of course remove all the sprites though. 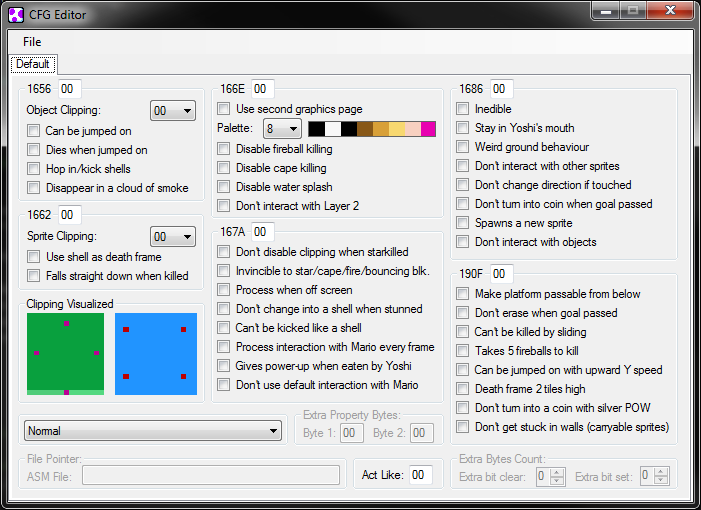 How will it affect with LM's custom sprite list by the way?Receiving?

Anyway...well, it's still not Daiyousei, so I'll just have to keep waiting. It's something, though.

Posted on 2017-02-16 11:53:01 PMLink
Originally posted by imamelia
Anyway...well, it's still not Daiyousei, so I'll just have to keep waiting. It's something, though.
I'm too lazy to read everything about that tool, what makes it special/different compared to this one?

Posted on 2017-02-17 12:11:07 AMLink
imamelia has some very specific requirements before he can do literally anything that can actually be worked around already but that doesn't seem to work for him for some reason.Your layout has been removed.

Posted on 2017-02-17 12:40:37 AMLink
Originally posted by Erik557
Originally posted by imamelia
Anyway...well, it's still not Daiyousei, so I'll just have to keep waiting. It's something, though.
I'm too lazy to read everything about that tool, what makes it special/different compared to this one?
Some core ideas of Daiyousei, as far as I can recall are:
hijacks for all types of sprites
mirrors for the 16 bit addresses within sprites
using the extra bytes for sprites which is an element supported by Lunar Magic
using the EE bits in the sprites as part of the sprite number, thus going from 00-FF to 000-3FF.
Enhanced CFG files.

My main problem lies withe last part as this would break backwards compatibility with most sprite tool sprites.
As for other stuff, there is actually a lot that I want to add to this tool such as:

-Cluster and Extended sprites seem to have easy enough hijacks to add support for.
-The additional bytes per sprite also seem neat, since they allow for vast custom behavior per sprite slot. Plus things seam easy enough to pull of.
-More stuff in CFG files: Like information to build .ssc, mwt, mw2 and s16 files for Lunar Magic.

For now though, I just want confirmation that this works as intended :3


Originally posted by imamelia
Was there anything wrong with the C3 thread? And what does the name stand for?
Pretty Inaccurate Xylophone Imitation.
Also yes, the C3 version was a bit buggy. Most notable the fact that it didn't put the routines file in the correct folder.Anime statistic on MyAnimeList:
400 animes completed ✓
6000 episodes completed ✓
100 Days completed ✓
... what even am I doing with my life?

Posted on 2017-02-17 04:15:21 PMLink
What was used for VLDC9 was actually just a patch Lui37 made.
Though Jack could totally include that if he wants to, I'd be fine with all the sprites I made to be included too.Your layout has been removed.

Posted on 2017-02-17 04:35:54 PMLink
Originally posted by leod
What was used for VLDC9 was actually just a patch Lui37 made.
Though Jack could totally include that if he wants to, I'd be fine with all the sprites I made to be included too.
I know that, but I looked through his file in but no luckMy Mode 0 guide.

Posted on 2017-02-22 11:23:11 PMLink
This seems like a really good alternative to Sprite Tool... I was looking for a different program or a way to work around the fact that Sprite Tool seems to like causing my game to freeze at the "Nintendo Presents" screen, and I thought I'd try this, but whenever I try to insert any sprites I get a list of errors like this:

Posted on 2017-02-22 11:25:46 PMLink
It's not a bug. It's caused by the fact that this spritetool forces the use of asar however the sprites aren't written in asar format (Labels work a bit different, dcb is db in asar etc)

There's this tool to convert it though.

Posted on 2017-03-05 07:45:21 PMLink
Originally posted by Roberto zampari
If the PIXI is accepted and SpriteTool become obsolete, i wonder what would be the new version of Lunar Magic for custom sprites insertion.

It would be almost the same thing, nothing more, nothing less; it's unlikely that newer versions of LM would change THAT much. The thing would be the handling of the new properties and such.

Sincerely, I'm hoping to see this tool replacing SpriteTool. The concept of use seems better, and the assembler used definitely is a plus (TRASM syntax gives me the creeps). The idea of shared routines, as seen with GPS, is the perfect solution to avoid the waste of ROM space from all those GET_DRAW_INFO, SUB_OFF_SCREEN and SUB_HORZ_POS routines we had to include in every sprite. I'm surprised that this feature wasn't implemented before.

Posted on 2017-03-07 01:26:54 PMLink
No idea what status override is suppose to be. First time I've ever heard of it. Much of the code was just taken from sprite_tool, so if it worked there it should work here too.
That said, as far as I recall, extra property byte 2 (just like 1) is just an additional byte in memory. It doesn't serve any special purpose other than allowing you to have different behaviors on the same asm file with different cfg files.Anime statistic on MyAnimeList:
400 animes completed ✓
6000 episodes completed ✓
100 Days completed ✓
... what even am I doing with my life?

Posted on 2017-03-07 01:39:00 PMLink
Bit 7 of extra property byte 2 can enable status override so it isn't "just" an additional byte you can use.
Status override allows you to override sprite states ($14C8) so you can write your own. Sonikku talked about that a bit in the Advanced asm thread
But yeah, the feature is almost never used and not a lot of people even know about it.
Last edited on 2017-03-07 01:42:59 PM by TheBiob