Posted on 2018-01-15 02:09:39 AMLink
After only playing three levels in, I've already seen enough bugs to determine the hack is worth rejecting. These all need to be fixed before this hack can be accepted. 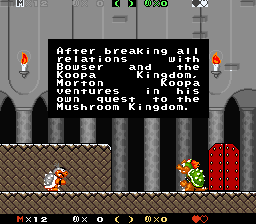 The status bar is mirrored to the top of the screen during the intro. This only happens after the message box opens, implying that this happens whenever a message is open.

It's hard to tell, but also notice the black line one pixel above the status bar. That line is constantly moving, similar to what happens when too many animations are on-screen at one time. The moving black line is likely a vblank issue. 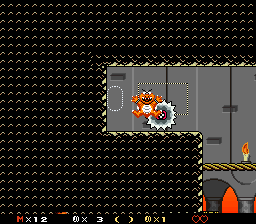 Sometimes when you die, the foreground palette glitches. This happened in the first two levels and is likely global. 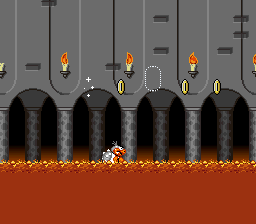 Every time you die, the status bar disappears for a few frames. 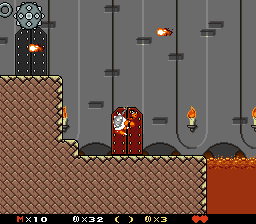 This candle flame priority issue isn't crucial but should be fixed anyway. 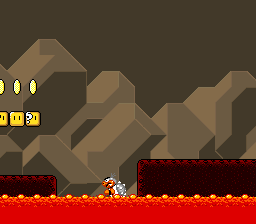 Sometimes when you die the background brightens for one frame.

The music and layer 2 trigger doesn't play well with dying. The layer 1 shake continues even while dying. When Morton falls into the lava almost immediately after the trigger, he freezes twice for a few frames: once normally during the death animation, but also once a few frames earlier before you actually die. Finally, dying on the same frame the trigger is triggered freezes the game.

I'm glad I grabbed this hack even though I knew going into it that it was hard, because my propensity to die a lot help discover quite a few of those glitches. Shame that that last image was my own level.
Last edited on 2018-01-23 06:31:04 PM by Noivern

Posted on 2018-01-17 05:19:17 PMLink
The pressing issues from before are fixed; fantastic job with that. But now bowling balls and blarggs are missing sound effects, causing music crashes and then game crashes during the next level transition.
Last edited on 2018-01-17 05:20:13 PM by Noivern

Consistent bug that happens whenever a bob-omb explosion would kill another sprite. It crashes the game and wipes my save.

The animation flashiness and status bar appear to be something completely different and also change depending on the emulator. This gif was recorded with higan. In snes9x, the rock layer animates properly and the status bar only bugs mildly.
Last edited on 2018-01-23 06:18:53 PM by Noivern