To that end I've been studying ASM for quite some time now, and while I certainly don't stand among the masters, I'd like to share the fruit of my efforts with you all nonetheless. In the spirit of C3, I humbly present my first submission here:

This patch allows Yoshi to function properly in all 8 sprite palettes, thus doubling the number of usable colors of Yoshi. Moreover, this patch moves a huge number of Yoshi's various functional parameters into easy-to-edit defines while simultaneously splitting them up on a per-Yoshi-color basis. Want green Yoshi to have a tongue that only stretches half as far as yellow Yoshi's? Want blue Yoshi to run away twice as fast as red Yoshi? It can all be easily done, with no ASM knowledge required whatsoever.

If you are familiar with ASM, however, then this patch provides a smörgåsbord of tidy hijacks to let your imagination run wild. Yoshi's tongue gets longer as it eats berries? Yoshi does not run away if you have all 5 Dragon Coins? The sky is the limit. Heck, with enough free RAM and some palette trickery, one could make a 90 level hack with a totally unique Yoshi in each stage.

This patch utilizes Lunar Magic's extra bit setting for non-custom sprites, allowing the new Yoshi palettes to be inserted into the level without requiring any custom sprites; .s16 and .ssc files are included to ensure proper sprite display in the editor. There are no included palette files, meaning it's up to you as the user to make your Yoshis look good and keep them consistent across different levels. It should also be noted that, unfortunately, the patch is not currently compatible with SA-1.

This patch's functions don't translate well to pictures, but I think you can get the gist: 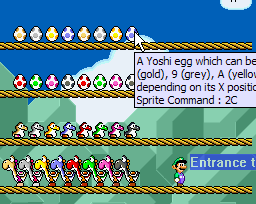 Thank you all so very much, for checking out my work and for making this community everything it is today. I look forward to getting to know a bit better these names, these people whose posts I've been reading for the lion's share of a decade. Cheers!

I'm going to sing this next one in the key of X, if you don't mind:

"I looked sideways, thinking of the dog-man. Now, I noticed a man identified similarities between dogs, as well as how to eat dog meat. I've seen our big dog, he often ate food. Men are like dogs, stabbed surprisingly strong and sharp. Once he is eating, shooting all the bites in all directions, then suddenly he is like a dog biting a person stronger. Since there are no additional cuts to my chin, I was looking quite comfortable - he worked with who I am, but he seemed to be a dog in every detail. In a place where all of them are fast, he could have been eating everything they ate. Was Teacher very upset? All bets are consistent with reason, but this person would confuse the tourism sector.

It is sufficient to be part of the dog at all,
but this enough to become part of all the dogs."

Last seen: 5 minutes and 8 seconds ago

Your patch is definitely no small feat - it looks really polished and well thought out, and it's something that makes you wonder why nobody else has made it yet. If this is everything it promises to be from a quick first glance, it deserves a place among the more well-known patches on here like the Powerup pack and the minimalist status bars. (And to think you taught yourself ASM without asking for help in the forums, too.) Nice job!

Hope you'll continue to stick around. I'm sure you'll fit right in.

(now to make sense of that footnote)

Posted on 2018-07-09 11:42:44 AMLink
Okay, so I've taken a look at the patch and I'm incredibly impressed. I don't think I've ever seen a patch which is so customizable and well-documented. It looks well-made and polished - this could be quite the breakthrough for Yoshi gameplay.

I still cannot comprehend how you managed to learn so much just by lurking. Welcome to the community!

Not to dismiss Erik, Blind Devil, Yoshifinatic, or all the ASMers, but I think this is probably the biggest surprise this C3 ASM-wise.!!! YOUR SAMPLES ARE COMING SOON !!!

Posted on 2018-07-09 11:53:39 AMLink
This is actually pretty amazing, ESPECIALLY as a first project. Ne need to be modest. The potential of this is actually amazing, especially considering what a major part of SMW Yoshi is. Some clever minds can and definitely will put this to some good use, I'm sure of it!Feel free to visit my website/blog - it's updated rarely, but it looks pretty cool!

Posted on 2018-07-09 02:01:42 PMLink
Well this is revolutionary. I haven't been this excited to use something from smwc.. ever, probably! Yoshi is probably the most versatile gameplay element for smw hacking and this is definitely gonna change the game . Amazing work, hope to see more from you.

Posted on 2018-07-09 03:48:46 PMLink
This is a nice addition to the "Yoshi" stuff in this site! Great job!
Tumblr | Facebook | Twitter | PM | SMWDB | SnesLab
Panty and Stocking—and Pop Team Epic, evidently—are coming back. Once again. Yes, I'm counting on you. 『いけいけ団長、頑張れ頑張れ団長！』Help us raise funds for the Armed Forces of Ukraine. #ДопомагаємоРазом / #HelpTogether
“Even if you personally are so dissatisfied with life that you want the world to end, surely the cruel reality is that it will continue on, unchanging. All the better for someone perfectly content, like me.”
– Aya Shameimaru, Touhou Suzunaan ~ Forbidden Scrollery

Posted on 2018-07-09 04:10:41 PMLink
Now that's some gorgeous work out there. Thanks god now i don't have to disasm yoshi routines by myself and work hard to get that working

It's hard to believe this is a first project, if so you'll be getting better than a bunch of masters here in a matter of months.

Welcome to SMWC, i wish you the best of luck out there

Posted on 2018-07-09 04:31:46 PMLink
Holy fucking shit. I gave a look at the ASM file and hot damn you can see the effort put into this. The amount of customization given to the user, the cleanliness of your code, how greatly documented... Quite easily one of the best ASM releases, not only from this year, but ever.
Congratulations, and kudos for the enormous amount of work you put into this. I don't think I'd have the patience to make something of this scope.
Last edited on 2018-07-09 04:32:31 PM by Erik

You have just created a legendary thing for smw. well done!I do art commissions cheap! PM here or DM via Discord for more details.

Last seen: 29 minutes and 22 seconds ago

Posted on 2018-07-09 06:03:05 PMLink
This is amazing! I looked into the patch, and as someone who has very little asm knowledge I still find it very clear and easy to customize. You did an excellent job commenting and documenting this. Great job and welcome!

Posted on 2018-07-09 06:58:07 PMLink
Oh my. This is an idea I had for a while now. I'm really glad to see that someone else came up with the same idea, and made a proper patch of it, because I always thought that we really should have more Yoshi gimmicks and this patch is perfect for that!My blog. I could post stuff now and then

Posted on 2018-07-09 07:44:39 PMLink
I rember thinking how cool it could be giving Yoshi different habilities per color among with the ones inherited from the original game. Red Yoshi affording to stand in lava, blue one swimming faster, yellow one killing harder-to-defeat enemies (chuck, wiggler, spinny and such) by just stomping on them, you name it. It's amusing to see something as near to what I evisioned as this actually available out there. It's a dream, man.take a look at my youtube thingies